PART 6 IN A SERIES ON TRANSLATION 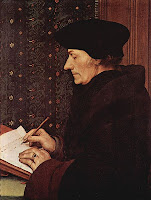 When Martin Luther set out to reform the Church, Erasmus of Rotterdam (1466 or 7 - 1536), an influential Dutch priest and brilliant humanist scholar, was initially supportive of the Lutheran enterprise. Luther and Erasmus parted ways over the question of human free will. In a nutshell, Luther said that our human will is bound to sin. Erasmus had a much higher opinion of humankind. Justo Gonzalez, in The Story of Christianity, Volume 2 (pp. 42-43) suggests that the free will debate was a pretext on the part of Erasmus, an amicable way to part with the Lutherans.

Lovers of the New Testament, regardless of denomination, owe Erasmus a debt of gratitude. It was he who, in 1516, first published a Greek New Testament. His work went through many editions, which included numerous corrections. It was in the preface to the 1633 edition published by the Elzevirs of Leiden, that Erasmus’ work was called the “textus receptus” (Latin for “received text), a name that adheres to this day.

Erasmus’ Greek text was the basis for Martin Luther’s German New Testament, and for the 1611 King James Version.

Erasmus had only eight manuscripts to work with, and those were incomplete. For example, the manuscript that he used for Revelation was missing its last six verses. The resourceful scholar overcame this difficulty by back-translating the missing verses from the Latin of Jerome’s Vulgate (c.f. this post) into Greek. He did surprisingly well, all things considered, but at Revelation 22:19 he managed to turn a tree into a book. According to Bruce Metzger, this “reading occurs in no Greek manuscript.” Apparently the scribe who had made Erasmus’ copy of the Vulgate “accidently miscopied the correct [Latin] word ligno (‘tree’) as libro (‘book’).”**

So the King James Version reads:


Most modern translations, based on modern, critical Greek texts read like the Common English Bible:

If anyone takes away from the words of this scroll of prophecy, God will take away that person’s share in the tree of life and the holy city, which are described in this scroll. (Rev. 22:19, bold emphasis added).

I found Holbein's painting of Erasums at Wiki, of course. Among modern translations only those, like the New King James Version, deliberately based on the texts underlying the KJV have “book of life” in Rev. 22:19. Next in this series, I will take up the matter of modern, critical Greek New Testaments.