THE YEAR OF BLOGGING BIBLICALLY: DAY 119 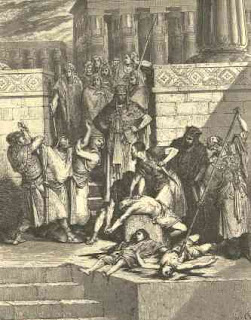 As I wrap up my reading of 2 Kings, it's probably a good time to note that this is also the end of a single, extended narrative in the Hebrew Bible. The story began at creation in the book of Genesis and ran through the period of the Patriarchs when YHWH chose the descendants of Abraham and Sarah to be his special people. Those people wound up in Egypt serving as Pharaoh's slaves until YHWH appointed Moses to lead them out into a land of promise. After 40 years of travel and travail, they entered the land and, under Joshua's leadership, conquered and settled in it. For a time Israel was a loose tribal confederation led by charismatic judges.

The book of Ruth, set in the time of the judges, interrupts the flow of the narrative.

Eventually the people demanded a king such as other nations had. Saul, the first king of Israel, failed to establish a dynasty. David, YWHW's fair haired boy, succeeded him and was followed by his own son, Solomon. After Solomon the kingdom was divided. The Davidic dynasty continued in the southern kingdom, Judah.

Kings of Israel, the northern kingdom, came from several dynasties. None of the northern kings was reckoned any good but Ahab was by far the worst. Ahab was opposed by the prophet Elijah and his protege Elisha. Jehu, anointed by Elisha, was a staunch Yawist, and a violent reformer. Israel was conquered by the Assyrians, its people scattered in exile and never heard from again.

Monarchs of the southern kingdom were, for the most part, not much better than those up north. Two notable exceptions are the reformers Hezekiah and Josiah. Josiah's reforms are the subject of 2 Kings 23.

Before we get there, I want to mention that we'll be moving into 1 Chronicles next. The books of Chronicles repeat much of the material from 1 Samuel-2 Kings though with different, sometime very different, emphases. 1-2 Chronicles also form a single narrative with Ezra-Nehemiah. With the exception of the insertion of Ruth, the Christian canon, to this point, is identical to the Jewish canon of scripture. After 2 Kings, the canons diverge. The Jewish canon goes next to the book of Isaiah. The Jewish canon puts the books of Chronicles in a different section of the Bible altogether. They are, in fact, the last books of the Hebrew Bible and are preceded by Ezra-Nehemiah.

In the past I have read the Hebrew Bible in its Jewish order and found it instructive. It is worthwhile to separate the books of Kings from the books of Chronicles. On the other hand, it is useful to put Ezra-Nehemiah after the Chronicles. Canonical order is, at least in part, theologically driven. The Protestant/Catholic Old Testament ends with the book of Malachi which promises that the prophet Elijah will return. Matthew, the first book of the New Testament describes John the Baptist as wearing clothing like Elijah's (Matthew 3:4).

But back to 2 Kings 23. After hearing the reading of the book of the law, King Josiah deposes the priests of Baal and Asherah. He removes the objects of pagan worship, gets rid of those "consecrated workers" (who may not have been male cultic prostitutes), closes down the high places, et cetera. Not only does Josiah clean up worship in Judah, he moves north and destroys the altar that Jeroboam built at Bethel. This fulfills a suspiciously specific prophecy from 1 Kings 13. Human bones are used to descrate the illegitimate altars, but the bones of the nameless prophet of 1 Kings 13 and his Samaritan friend/antagonist are left undisturbed.

This reformation does not happen bloodlessly. Josiah has the priests of the high places slaughtered on their altars.

Perhaps most significantly, Josiah commands that the Passover be observed, something that has not happened since the time of the Judges.

In spite of Josiah's thoroughgoing Yawhism, the Lord is still angry about Manasseh. Judah's fate is sealed.

Josiah dies in battle against the Egyptian Pharaoh Neco. He is succeeded by Jehoahaz, another evil king. Jehoahaz is captured by Neco. Judah pays tribute to Egypt.

Next up, another evil king, Jehoiakim, takes the throne. Jehoiakim is a vassal to the Babylonian king Nebuchadnezzar. YHWH punishes Judah by sending waves of pagan marauders. The Babylonians keep the Egyptians at bay.

King Jehoiachin is no good. During a seige he surrenders to Nebuchadnezzar.Jerusalem falls. The wealthy and powerful, the soldiers and skilled workers, are taken into exile. The Babylonian king puts Jehoiachin's uncle Mattanaiah on the throne, renaming him Zedekiah. Zedekiah rebels disastrously.

Jerusalem is again beseiged. After two years, the city wall is breached. Zedekiah is captured. He is forced to watch his children executed and is then blinded by his Babylonian captors. The temple and all of Jerusalem's important buildings are destroyed. Some of the Judahites go back to Egypt. It's over. YHWH's people gave it a good run, but it's over. For now.

Eventually a remnant will be allowed to return to Judah and build a new temple, but that's getting ahead of the story.

Unlike the Assyrians, the Babylonians settled their exiles in communities and allowed them to preserve their culture and traditions.. During the Babylonian captivity the early Hebrew Scriptures were collected and studied. This may be the time in which rabbinic Judaism got its start.

The books of Kings end with a hopeful note. After 37 years Jehoiachin is released from prison and treated kindly by the new Babylonian king, Evil-merodach.