THE YEAR OF BLOGGING BIBLICALLY: DAY 147 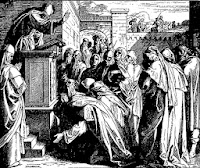 It seems that there is some debate in scholarly circles as to whether Ezra and Nehemiah were contemporaries. Nehemiah 8:9 is the only place where the two men are named together and there is a grammatical problem in that verse. The verb is singular. It may be that Nehemiah's name was dropped in by a redactor. If Ezra and Nehemiah were not contemporaneous then the chronology of the narrative is mixed up.

Anyway, in Nehemiah 8, Ezra the priest makes his reappearance. With the help of some Levites, he reads the book of the Law to the people of Judea. The scene is highly reminiscent of 2 Chronicles 24:39 ff. where King Josiah did the same thing. Josiah's book of the Law was probably an early version of Deuteronomy. Ezra's is likely much larger. Lutheran Study Bible suggests that it was an early form of the entire Torah. That would have been a lot of reading.

It appears that Ezra read and the Levites interpreted, maybe translating from Hebrew to Aramaic, maybe explaining the meaning of the text.

While I think I'd have been bored to tears (Hey, I was raised on television) Ezra's audience is moved to tears of penance.The Levites comfort them and tell them to celebrate, eating, drinking, and sending gifts to the poor.

Next they celebrate the festival of Succoth (Booths). This celebration is unique since the time of Joshua, but just how differed from earlier celebrations is an open question. The text seems to suggest that there had been no celebration of Succoth since Joshua's time, but Judges 21:9, 1 Samuel 1:3, and Ezra 3:4 say otherwise.

Chapter 9 picks up two days after the Succoth celebration and tells of a national day of penance. Either Ezra (according to the Septuagint) or the Levites (in the Masoretic text) pray at some length recounting the history of Israel from Abraham through the Exodus, the settlement of Canaan, the exile, and right up to the narrative present: the resettlement. The prayer complains of Israel's current circumstances. They are "slaves" once more, at least in the sense of being vassals to Assyria.


And then they (who they are is specified in the next chapter) make a written covenant.