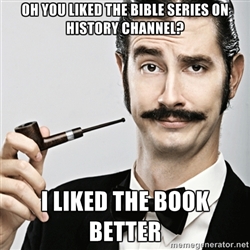 I'm a snob. At least that's what my friends tell me. And if your friends won't tell you a thing like that, who will?

They say I'm a snob about pens and paper. It is true that I prefer a fountain pen and dislike cheap paper. Does that make me a snob?

They say I'm a coffee snob. I do appreciate a good cup of coffee. I will drink the stuff they serve in church basements, but....

They say I'm a snob about beer and wine. I'm not really. I don't care if you drink beer from a can and wine from a box. I just reserve the right to make fun of you if you do.

And they say that I'm a Bible snob. Okay, I have strong but well-informed opinions about Bible translations and I'm not shy about sharing them. If that constitutes snobbery then I am guilty but unrepentant.

For this Year of Blogging Biblically I've been using the 2011 revision of the New International Version (NIV) as my primary Bible. The NIV was first published in 1978, underwent a minor revision in 1984 and was completely revised in 2011. I think that it was originally produced as a doctrinally driven alternative to the academic Revised Standard Version (RSV). For a time the NIV was the best-selling English translation of the Bible. There is a sizable cadre of Evangelicals who learned their Sunday School memory verses from the NIV. Today the English Standard Version which, I think, was produced to correct the perceived doctrinal flaws of both the RSV and the NIV, has taken a sizable bite out of the NIV's former dominance.

I chose the 2011 NIV for my Year of Blogging Biblically mostly because I hadn't done much reading from it. I regularly refer to other translations as well, especially the New Revised Standard Version.  The NIV is a fairly readable translation, a point in its favor. The Bible snob in me has found something in it to which I take exception. The NIV tends to translate certain difficulties away.

For example, the Hebrew Bible gives the name of the King of Tyre as "Hiram" in  Samuel-Kings (see 1 Kings 5) but in Second Chronicles the same name is rendered "Huram" (see 2 Chronicles 2, which parallels 1 Kings 5). Now, these are simple variants of the same name so the issue is minor.

Again, in the Hebrew Bible the name of the man whose threshing floor David bought is "Araunah" in Second Samuel 24.  In 1 Chronicles 21 and 2 Chronicles 3:1 (from today's portion) the same man's name is given as "Ornan." This, too, is a simple variant.

The NIV smooths over all of these differences. It gives the name "Hiram" in both Samuel-Kings and Chronicles. Likewise the name "Araunah." This is obviously no big deal, but I think that it gives a false impression about the actual biblical literature, the writings that underlie our English translations. It makes it appear as if Samuel-Kings and Chronicles are cut from the same cloth, that they represent a single, coherent tradition. The fact is that these works come from different times, address different concerns, and reflect somewhat different traditions.

To the NIV's credit it does footnote the differences that it glosses over. My preference would be to have the actual text reflect the discrepancies and the footnotes indicate that "Ornan" is a variant of "Araunah," "Huram" a variant of "Hiram."

As for the narrative, in the chapters at hand Solomon allies with Huram to obtain more materials for the temple. The temple is built by a workforce impressed from the foreigners living in Israel. The temple's furnishings are made and the ark is brought into the temple. The cloud of YHWH's glory descends on the temple and drives the priests out.

In Solomon's prayer (2 Chronicles 2:4-6) the King says that the temple cannot contain YHWH, an expression of the Chronicler's theology.

The Chronicler says that the temple is built on Mt. Moriah (2 Chronicles 3:1-2), the mountain where Abraham nearly sacrificed Isaac in Genesis 22).

And 2 Chronicles 2:18 says that there were 3,300 overseers managing Solomon's workforce. The parallel account in 1 Kings 5:16 says that it was 3,600. The Septuagint, that ancient Greek translation of the Hebrews Scriptures, has the number 3,600 in both places--a correction? 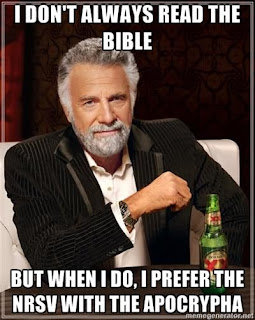