THE YEAR OF BLOGGING BIBLICALLY: DAY 58 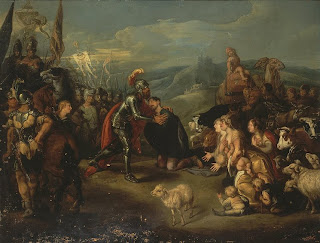 Esau was Jacob's older brother. (Genesis 25:25-26) Both brothers had multiple names. Jacob was also called Israel (Genesis 32:38). He was the progenitor of the Israelites.

Esau was also called Edom.(Genesis 25:30) He settled in the land of Seir. (Genesis 36:8)  His descendants were the Edomites.

All that is ancient history.

That is the more immediate background.

The Book of Deuteronomy purports to be a series of speeches made by Moses, just before his death, to the Israelites, just before their invasion of Canaan. Deuteronomy means "Second Law" and much of the book is taken up with the laws by which the Israelites should live once they occupy the land. The book of Leviticus was, I suppose, the "first law."

In Deuteronomy 2:1-8, we read of the Israelites travels around Edom. As it is told here, the Israelites are not refused passage, but skirt Edom so as not to alarm the Edomites.

What's up with these discrepencies?

The Pentateuch is not the work of a single author. There are several sources behind the five books attributed to Moses. Accounts of the same events vary in their details. Multiple theological views come into play.

I think that Deuteronomy itself, though probably made up of several layers of tradition, has a cohesive theology. As we read along, let's try to dope that theology out.