THE YEAR OF BLOGGING BIBLICALLY: DAY 72

During the Second World War Hollywood produced a slew of war films. These movies were propagandistic by nature. Some of them told exciting stories. They presented a black-and-white morality and an us-versus-them mentality. Good guys and bad guys were clearly distinguishable. Enemies were demonized, Allies apotheosized. The death of an enemy was something to cheer. The death of a hero was always tragic, a martyrdom, sometimes a great self-sacrifice. Only later, and at that, only occasionally, did moral ambiguity creep into combat movies.

The book of Joshua was produced by people who believed that YHWH had chosen the Israelites as his special people. They also believed that YHWH had given them the land of Canaan as their special possession, as long as they kept covenant with their God. The story of Joshua is told with all of the moral certitude and excitement of a WWII combat flick. God is unquestionably on the side of the invading Israelites (provided they follow YHWH's instructions). The inhabitants of Canaan are more obstacles to overcome than human beings.

I don't know how much actual history is in the book of Joshua. I suspect that it isn't much. It is, however, the way that ancient Israel told its story. "God gave us this land," it proclaims, which makes the eventual loss of that land more poignant, and its (partial) restoration more hope-full.


In the ancient world, a nation's god/s were thought to go to war with the nation. Victory in battle was a victory not just for the army, but for their god/s. The book of Joshua is not just about the Israelites conquering the Canaanites. It is also, and perhaps more so, about YHWH defeating  the gods of the pagans.

The authors of the Bible were spiritual giants. Monotheism may have begun in Egypt, but it never caught on there. It is the Hebrews who gave us belief in a single God. I believe that YHWH chose Israel and gave them the land. I don't believe that YHWH desired, or ordered the destruction of entire peoples.


As always, being a Christian, I see Jesus as God's most intimate self-revelation. Jesus taught a path of non-violence, self-giving, and inclusion. Joshua does not have the final word. Jesus does.

(Just as an aside, Joshua and Jesus are different forms of the same name. The form Joshua comes into English from the Hebrew. Jesus is the English form of the Hebrew name through the Greek.)

In chapter 9, the people of Gibeon concoct a ruse by which they save themselves from the destruction that they had seen visited on Jericho and Ai. As a result they become "hewers of wood and drawers of water" for the Isrelites and remain so "to this day."

The repeated use of the phrase "to this day" indicates that the book of Joshua was put into its final form well after the time in which its narrative is set.

Chapter 10 tells of the defeat of five kings  of Southern Canaan and, in rapid succession, the conquest of their cities. This chapter tells the well known story of how Joshua ordered the sun to stand still in the sky which reflects an ancient geocentric cosmology. There is reference here to a long-lost "book of Jashar," also mentioned in 2 Samuel 1:18. 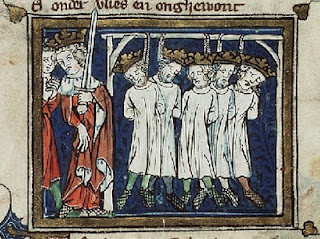 As was done with the body of the king of Ai, the corpses of the five kings are exposed, either hung trees or poles. In keeping with Deuteronomy 21:23, the bodies are removed before sunset.

Chapter 11 tells of the defeat of the remaining kings in Northern Canaan. With that, the conquest is complete and "the land had rest from war."

Posted by Brant Clements at 9:04 PM