THE YEAR OF BLOGGING BIBLICALLY: DAY 66 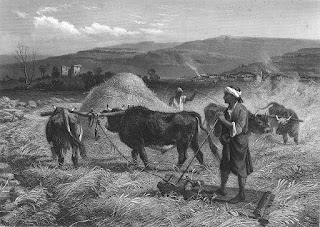 Some of the laws found in chapters 24-25 of Deuteronomy require kindness on the part of the Israelites toward their neighbors, the poor, foreigners, and even animals. Newlyweds are exempt from military service for a year. Millstones (required for a miller's livlihood) cannot be taken as collateral for a loan. Day laborers must receive their wages by sundown. Oxen are not to be muzzled while treading grain. Some of a crop is to be left in the field at harvest so that the poor can eat.

Some of the laws in these chapters are strange and culturally remote. The law of levirate marriage the business of calling someone "unsandaled" are strange to us.

The law found in 25:11-12, in which two men are fighting and one's husband comes to his aid by grabbing the other's genitals is weirdly specific. The punishment (the woman's hand is cut off) seems harsh.

The instruction to destroy the Amelakites is also harsh. YHWH really didn't like the Amelekites. A commandment to commit genocide rightly appalls us.

On the other hand, the law about using honest weights and measures in trade is a good thing.

Deuteronomy represents ancient Israel's best efforts to establish a kind, just society in accordance with God's will. Sometimes they got it gloriously right. Sometimes they blew it.

For Christians, Jesus is God's most intimate self-revelation. Reading these Scriptures through Jesus goggles I think we can be outraged by the order to commit genocide while celebrating the laws that call for honesty, kindness, care for the poor, and justice.

Chapter 26 begins with instructions for an offering of firstfruits. Verses 1-11 are a common reading at harvest thanksgiving services. The offering is made with a remembrance of what God has done for his people.

Verses 12-15 are instructions for the third year tithe that is set aside for the poor and the Levites. 16-19 say that those who keep these commandments will be blessed.

Chapter 27 instructs that all the commandments should be written on stone markers in Canaan. An altar is to be built on Mt. Ebal. A ceremony is described in which a series of curses are called down on those who break the commandments, or at least some of them. As the curses are pronounced, the people are to reply "Amen" ("Let it be so.")