THE YEAR OF BLOGGING BIBLICALLY: DAY 78 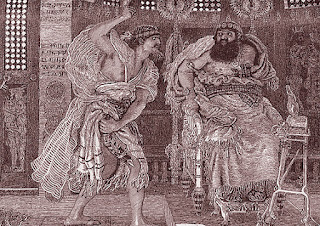 The book of Joshua made it sound as if the conquest of Canaan was pretty seamless. Oh, sure, there were a few Canaanites left in the land, but they were mostly put to forced labor. Judges tells a somewhat different story. In 3:1-5 we learn that quite a few of the land's original occupants are left. They are there "to test the Israelites to see whether they would obey the Lord's commands."

Of course, the Israelites do not obey YHWH's commands and so are oppressed by the king of Aram Naharaim. Othniel arises as the first of the judges, liberates the Israelites and the land has peace for 40 years, fulfilling the pattern described in the last chapter.

The story of Ehud is particularly fun. I think that ancient idioms, circumlocutions, and translational modesty obscure some of the details of this tale. Granting that I could have some of the finer points wrong, here's what I make of it. The Israelites again disobey YHWH. YHWH allows Eglon, the corpulent king of Moab, to oppress them. They cry out to YHWH and Ehud arises as the next judge to deliver the people. Did I mention that Eglon was obese? Think Jabba the Hut. 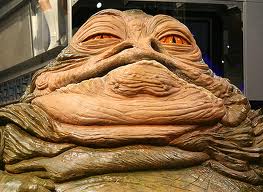 Ehud is a left-handed Benjaminite. We will see that the tribe of Benjamin has more than its share of southpaws. Ehud makes himself  a short sword with an 18 inch double edged blade. This he straps to his right leg, under his robes, for a cross-draw. Whether he has a concealed carry permit is not clear.

You get the idea.

I have read that defecation was not considered a private function in the ancient world. I don't know. I rather think that Eglon was being a pig. He was probably showing Ehud just how highly he thought of him by relieving himself in Ehud's presence. So, Ehud pulls his weapon. Eglon, surprised, jumps up from his, uhmm, throne. Ehud stabs him and...Did I mention that Eglon had a weight problem?...the weapon, handle and all, disappears in the king's belly. Dying, the king soils himself.

Now, Ehud must make an escape. Leaving the doors of the cool chamber locked behind him, he has only one way out that I can imagine. This was a two -story outhouse. The lower level was a receptacle that some unfortante slave no doubt had the duty to clean out from time to time. I'm thinking (and I'm not alone in thinking this) that Ehud exited through the first floor.

Anyway, it was a dirty job but Ehud was up to it and Israel got 80 years of peace.

The next judge, Shamgar, gets scant notice, only one verse. He is said to have struck down 600 Philistines with an oxgoad. He is not the only judge who was handy with improvised weapons.

There are Christians today who insist that women should not hold positions of leadership among God's people...or at least over God's men. The judge Deborah, whose story is told in chapters 4 and 5, is an inconvenience for them. The Old Testament is the product of a patriarchal culture. Yet neither the author of Judges, nor YHWH himself, seems to object to Deborah's leadership. It's a little embarassing for an army commander named Barak, but that's his problem.

Barak, accompanied by Deborah, goes to war against a Canaanite general named Sisera. The Canaanite army is routed, but Sisera himself escapes. He takes refuge in the tent of a Kenite man named Heber. The Kenites, remember, were related to Moses' father-in-law. Heber doesn't seem to be at home, but his wife, Jael takes the exhausted Sisera in, gives him a drink of milk (to help him sleep?), and tucks him in under a blanket. When the general is sleeping soundly, Jael drives a tent peg through his skull with a hammer.

That Jael must have been a strong woman! 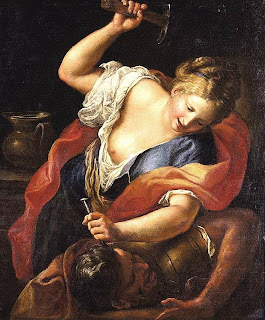 Men who don't think women are their equals would be wise to keep that opinion to themselves around Deborah and Jael.

Judges 5 consists of a song of victory sung by Deborah. I think Barak provided backing vocals. The tribes of Zebulun and Naphtali get praised. The other tribes are derided for not taking part in the war. Jael gets glory. Sisera's mother, pictured as waiting for her son to return from war, is mocked.

And Israel has another 40 years of peace.