THE YEAR OF BLOGGING BIBLICALLY: DAY 73 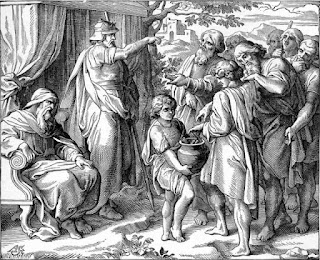 War may be hell, but at least it makes for good stories. Now that the land has "rest from war" (Joshua 11:23) the narrative slows down a little.

In chapter 13, YHWH instructs Joshua, now grown quite old, that there is still land to be conquered. Verses 8-33 describe the territories across the Jordan apportioned to the tribes of Reuben and Gad, and the half-tribe of Manasseh. The Levites, we are reminded, do not receive a territory. They have cities and fields, but no territory of their own.

Chapter 14 begins a description of the division of the territories west of the Jordan among the remaining nine and a half tribes of Israelites.

Caleb, the one spy who, 45 years earlier, counseled the Israelites to invade Canaan immediately, asks Joshua for the land promised to him and receives it. At the age of 85, Caleb has plenty of fight left in him. He seemingly drives out the inhabitants of his land with little effort and the land once more has "rest from war."

Chapter 15:1-12 describes the boundaries of the land allotted to the tribe of Judah.  Verses 13-15 narrate, very briefly, Caleb's campaign to conquer Hebron and Debir. Verses 16-19 are a short story about Caleb's daughter, Aksah, her marriage to Othniel (Her first cousin) and her request for some springs of water. Othniel will play a role when we get to the book of Judges.