THE YEAR OF BLOGGING BIBLICALLY: DAY 59 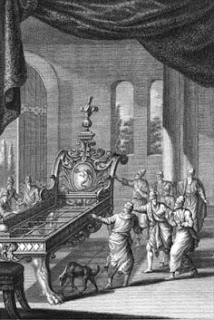 In Deuteronomy 3 Moses continues his recap of the Israelites travels from Egypt to the border of Canaan. He recounts the defeat of King Og of Bashan and the apportionment of the Transjordan lands to the tribes of Reuben, Gad, and Manassah.

King Og was apparently a giant. According to verse 11 his huge iron bed was "still in Rabbah" at the time Deuteronomy was written, a perspective some years after the events described. Either Moses didn't write Deuteronomy, or this verse was a later editorial insertion, or both.

Moses again tells how YHWH refuses to allow him to enter Canaan. He will view the land from Mt. Pisgah but he can't go in.

In chapter 4 Moses commands the Israelites to be obedient to YHWH. He reminds them of what happened to those who worshiped Baal at Peor (Numbers 25).  It wasn't pretty.

Moses' statement at verse 7 forces the question of whether the author of Deuteronomy was a monotheist or a henothiest.


For what other great nation has a god so near to it as the LORD our God is whenever we call to him? (Deuteronomy 4:7 NRSV)

The biblical record shows that some of its writers were henotheists. Others were monotheists. The worship of foreign gods was an ongoing problem in ancient Israel indicating that the ordinary citizens may even have been polytheistic. In the end, monotheism holds sway in the Bible. I think we'll find that the Deuteronomist was a monotheist. The Deuteronomist's theology and worldview were profoundly influential on the rest of Scripture.

The belief that there is only one God is a great and enduring contribution of the Hebrew people to the world's religious traditions.

Verses 15-31 repeat the prohibition against making idols. No images are to be made either of foreign gods or of YHWH. Verses 32-40 proclaim that YHWH is God. In verses 41-43 Moses designates the three Cities of Refuge in the Transjordan.

Verses 44-49 set the stage for Moses' discourse which begins in chapter 5.