THE YEAR OF BLOGGING BIBLICALLY: DAY 76 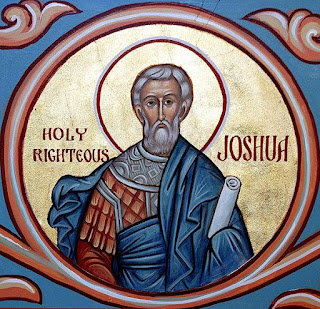 And so we come to the last few chapters of Joshua.

In chapter 22 the Reubenites, Gadites, and half-tribe of Manasseh, having kept their promise to assist in the conquest of Canaan, are given permission to return to their lands east of the Jordan. Once across the river, they build an altar. Their relatives east of the Jordan take this as a sign that the Transjordanian tribes are setting up a place of worship to rival the Tabernacle which is now parked in Shiloh.

The tribes west of the Jordan prepare for war.

The priest Phinehas, who proved his loyalty to YHWH back in Numbers 25 by spearing an Israelite man and his Midianite wife together, leads a delegation to confront the offenders. The transjordanians insist that their altar is not a place of worship, only a statement that "We, too, worship YHWH." Bloodshed is averted.

Chapter 23 is devoted to Joshua's farewell speech. It is reminiscent of Moses' speech in Detueronomy 29-30. Joshua's main points are: Serve YHWH. Avoid idols. Don't intermarry with the Canaanites. Scholars call the author/s of Deuteronomy (and other portions of the Hebrew Bible) the Deuteronomist.These concerns, along with promises of blessing and warnings of doom, are the Deuteronomist's special emphases.

In chapter 24, Joshua speaks the first-person words of YHWH as a prophet. (Verse 7, curiously lapses into the the third person). YWHW reminds the Israelites of their history from Abraham, through the Exodus, to their present state of settlement in the promised land. In his own voice, Joshua calls the Israelites to "Choose this day whom you will serve," YHWH or the pagan gods of the Canaanites. Despite strict warnings that they will not be able to serve YHWH and that they will suffer dire consequences, the people insist "We will serve the Lord."