THE YEAR OF BLOGGING BIBLICALLY: DAY 70 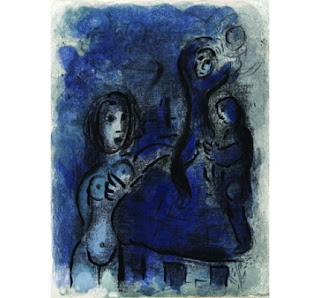 If Genesis, Exodus, Leviticus, Numbers and Deuteronomy collectively make up the Pentateuch ("the five scrolls"), the addition of Joshua is sometimes called the Hexateuch ("the six scrolls") because it continues the narrative begun in the previous books.

Following the death of Moses, Joshua takes the role of leader over the Israelites. He will be their general in the war of conquest over Canaan. In chapter 1, Joshua is told (3 times) to "be strong and courageous," words that have been applied to him before.

In chapter 2, Joshua sends two spies to scout out the land, "especially Jericho." In that city, they stay in the home of a prostitute named Rahab. She protects them from the king of Jericho and, in exchange, barters for her life, and the lives of her family, when the Israelites attack the city. She is an interesting case.

Perhaps the most intriguing question concerning Rahab is: Just why were those Israelite spies spending the night in her house? I think I know.

It is interesting, at the least, to notice that Israelite men consort with prostitutes and no moral judgment is pronounced upon them in the text. When Judah slept with Tamar (Genesis 38) he was not judged for patronizing a sex worker, but for withholding his son Shelah from his widowed daughter-in-law.

Rahab was a traitor to her own people. Fear of YHWH is her stated reason. We can only guess at the circumstances that led her into prostitution. It is pure speculation to say that she may have been resentful toward the men of Jericho who had used her. I think it is clear that she was resourceful and used what little leverage she had over the Israelite spies to ensure her own future and that of her family.

In chapters 3-4, in a scene deliberately (even heavy-handedly) reminiscent of Exodus 14, Joshua leads the Israelites across the Jordan river. The invasion has begun. A pile of 12 river stones is set up on the Jordan's bank as a monument. 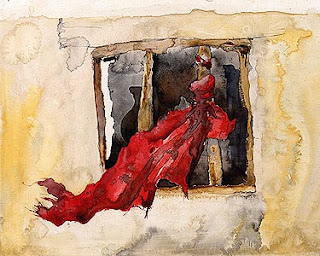 The image of Chagall's lithograph Rahab and the Spies of Jericho was lifted from this website. It is a commercial website. My link should not be considered an  endorsement. The painting Rahab's Window was found at the website of Mat Barber Kennedy. I like his work.