THE YEAR OF BLOGGING BIBLICALLY: DAY 71 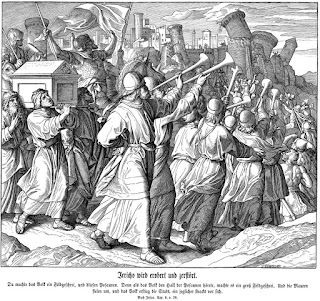 After the Israelites cross the Jordan as on dry ground, the Canaanites are afraid of them.

In Joshua 5:2-12, Israel's new leader commands that the Israelite men be circumcised. Apparently, the ritual was not observed during their travels through the wilderness.

When the first Passover in Canaan is celebrated, the manna that sustained the Israelites in their travels ceases to fall from the sky. Now the land will provide for God's people.

Verses 13-15 prove that my memory is fallible. In this post, where I discussed Moses' encounter with the burning bush, I said that I didn't recall anywhere else in the Bible where someone was commanded to remove their shoes because they were standing on holy ground. Here Joshua has a vision of a man, the commander of YHWH's army who will, presumably fight on Israel's behalf. The man tells Joshua to...you guessed it...take off his shoes because...that's right...he's standing on holy ground.

If the Jordan crossing thing didn't cue you in, this should make it clear: Joshua is a leader like Moses.

In Joshua 6:1-21, Joshua "fit" the battle of Jericho. The city, and every person and thing in it, is devoted to the Lord. The people and animals are to be killed. The goods either destroyed or given to the priests for service in the Tabernacle.

The destruction of Jericho begins when, after considerable ritual, the "walls come a-tumbling down." Presumably the part of the wall which formed a portion of Rahab's house (Joshua 2:15) did not collapse. Rahab and her family are spared, as they were promised. The statement that "she has lived in Israel ever since" is an explanation for the fact that, even after the conquest, there were Canaanites living in Israel.

In chapter 7 we learn that an Israelite named Achan disobeyed the order to devote everything in Jericho to the Lord. He kept a few things for himself.

We live in an individualistic culture. The Bible was written in a collectivistic culture where a person's identity is defined by the groups to which they belong: family, clan, village, nation. Achan's misdeed affects the whole community.

When the Israelites attack the city of Ai (a small, weak sort of city) they suffer a humiliating defeat. When Achar's theft (for he stole from the Lord) is discovered, he is stoned to death and the purloined goods destroyed.

With that little matter out of the way, the Israelites again attack Ai (Joshua 8:1-29). Reading the description of the battle, I can almost see it in the form of a Civil War documentary, with X's and arrows moving on a map. This time Ai is defeated.

The place name Ai means "ruin." It's an unlikely name for a city. Perhaps this story was told to explain the existence of a ruined city whose previous name was unknown.

In verses 30-35, Joshua leads the Israelites in a covenant renewal ceremony which was commanded to Moses in Deuteronomy 11:29-30 and described in Deuteronomy 27:2-8.


I found the illustration here.