HOW GOD BROKE THE FIRST COMMANDMENT 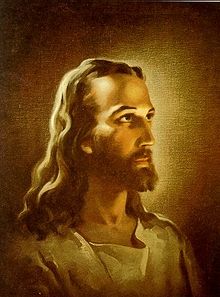 You've almost certainly seen this painting before.  Warner Sallman's Head of Christ has been reproduced  more than 500 million times if wiki is to be believed.

In some ways it isn't very good. The Jesus portrayed here is too wispy, too northern European, too white. This blue-eyed boy is certainly not a portrait of the historical Jesus of Nazareth. One of my seminary profs referred to this painting as "Beautiful Hair Breck Jesus."

A large copy of the painting hangs in the narthex of my church. I was looking at it Sunday morning as I folded bulletins for the morning's service. Bulletin-folding is brainless work and it allows one's thoughts to wander free. So I was thinking  that Jesus didn't look like this painting, but he did look like something. More properly, Jesus looked like someone. Someone specific. His eyes were a particular color; nose a certain shape; his mouth a specific width.

The first commandment (or the second by some numberings) prohibits Israel from making images of God. Unlike earthly creatures, God is ineffable, holy, numinous, and, in large measure unknowable. No earthly image can portray God.

The Christian doctrine of the incarnation says that God dwelt among people in the specific form of Jesus of Nazareth. A skilled artist could have made an accurate portrait of him. Had there been cameras in first century Judea someone could have taken his photograph.

What this means is that God broke the first commandment.