THE YEAR OF BLOGGING BIBLICALLY: DAY 57 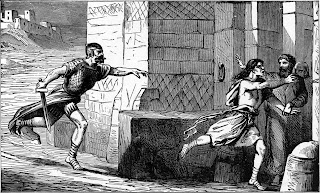 These two short chapters bring us to the end of the Book of Numbers.

In chapter 35, the Israelites are instructed to provide towns for the Levites who will have no territory of their own. Six of their towns (3 in the Transjordan and 3 in Canaan) are to be designated Cities of Refuge.

"Eye for eye, tooth for tooth, life for life" is the rule of the land. In cases of murder an avenger, probably a close relative of the deceased, is to exact the death penalty on the killer. But what about manslaughter?

The cities of refuge are, I think, a tangible mercy from YHWH.

Chapter 36 completes the book with a sequel to the story of Zelophehad's daughters from chapter 27. The daughters were apportioned an inheritance along with the other clans of the Israelites. The problem is that if these women marry outside of their tribe, their land will become the property of another tribe. To rectify the situation, the daughters of Zelophehad are married off to their cousins. And that resolves the problem of women owning land!*

*Yes, I am being sarcastic.

Next: Deuteronomy 1-2
Posted by Brant Clements at 2:17 PM