THE YEAR OF BLOGGING BIBLICALLY: DAY 79 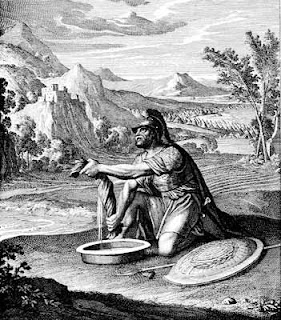 Judges 6:1-6 describes the plight of the Israelites. Verses 7-10 are an oracle from an unnamed prophet In verses 11-24 describe Gideon's encounter with an angel. Or is it YHWH himself? That the text is unclear indicates that this story was compiled from various sources.

Gideon's name means something like "feller," as in a feller of trees or a feller of foes. The angel addresses Gideon as a "mighty man of valor--" something like that. Gideon protests that really is not so great. He is the least member of a weak clan. Is Gideon just being modest?

The first time we meet Gideon he is threshing grain in a winepress to hide it from the Midianites. Does this seem a little timid? Cowardly?

Gideon comes across as a skeptic. "If YHWH is with us, why are in this predicament?" he asks. Without a sign, he will not trust that the angel is from YHWH. Later (vv. 36 ff.) He will ask for two more signs before he accepts that the Lord wants him to lead Israel against the Midianites. He receives all of the signs he requests.

After the encounter with the angel, and at YHWH's instruction, Gideon tears down his father's altar to Baal and his Asherah pole--instruments of pagan worship. He uses the materials to construct a proper altar to the Lord and offers his father's second best bull as a sacrifice. Second best?

All of this is done under the cover of night, another indicator of Gideon's timidity.In the morning, Gideon's father defends his son's actions to a group of angry neighbors. Gideon is given another name "Jerub-Baal" which means "he contends with Baal." Gideon gathers an army.

But the army is too large. Thirty-two thousand men are just too many. Twenty-two thousand are granted an exemption for cowardice, an echo of Deuteronomy 20:8. Ten thousand soldiers is still too large an army. So, again at YHWH's instruction, Gideon takes the troops down to a river to drink. Those who drink from their cupped hands are retained. Those who get down on their knees to drink are dismissed. I've heard it said that drinking from cupped hands indicates alert readiness for battle. I'm not sure that's the point. The main thing is to reduce the number of soldiers to 300. Finally the army is small enough to go into battle. 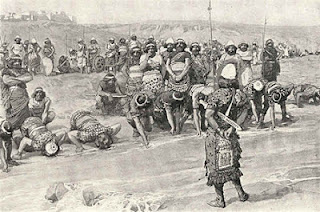 Three hundred Israelite soldiers, armed with pottery jars, torches, and trumpets, attack the Midianite camp by night. The Midianites are thrown into confusion. They attack one another and make a panicked retreat. Only then are other Israelites (from the tribes of Naphtali, Asher, Mannaseh, and finally Ephraim) called to join the battle.

YHWH gets credit for the victory.