THE YEAR OF BLOGGING BIBLICALLY: DAY 80 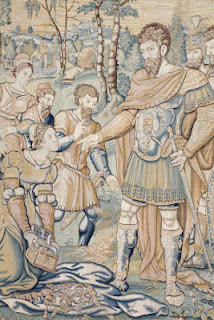 Chapter 8 concludes the saga of Gideon, a.k.a. Jerub-baal. While he seemed puny and timid in previous chapters, here he seems a new, though not necessarily better, man. Maybe this part of the stories reflects different source material. Maybe a little victory has gone to Gideon's head. Maybe the apparent change in him reflects the downward cycle in the book of Judges. Certainly his son Abimelek will take things to unprecedented depths in chapter 9.

In Judges 8:1-3, Gideon diplomatically defuses a tense situation involving some angry Ephraimites. In verses 4-21 he pursues the retreating Midianite leaders whose camp YHWH routed in chapter 7. When Gideon requests material aid from the cities of Shechem and Peniel, the people rebuff him. Gideon vows revenge.After capturing the fleeing Midianites, he punishes the churlish cities. After learning that Midianites have killed his brothers, Gideon executes them. The Midianites say that the brothers are "like you (i.e. Gideon) each one with the bearing of a prince." Gideon doesn't seem quite so puny now.

To his credit, Gideon refuses to be a king over Israel (8:22). To his discredit, he takes 1700 shekels of gold from the spoils of war and makes an ephod from them. If I have done that math correctly (always a doubtful proposition with me) that ephod weighed about 35 pounds. Which raises the question: Just what is an ephod?

Previously we encountered the word in reference to a priestly garment (Exodus 25:7). That doesn't seem to be what Gideon made. No, Gideon made some kind of object of worship (an idol). I suspect that, like the priestly garment, it may have been used for divination, but that's just speculation on my part. Whatever it was, Gideon's ephod was problematic because people worshiped it.

Still, Gideon is remembered well. Israel had 40 years of peace during his lifetime (8:28). He had 70 sons by his many wives plus a ne'er-do-well named Abimelek (also spelled Abimelech) by a concubine in Shechem. Gideon died at a "good old age" (8:32) and Israel immediately lapses into idol worship once more.

In chapter 9 Abimelek attempts to make himself king. First he garners support from his kinfolk in Shechem. Then, with the mercenary help of some "reckless scoundrels" he murders his 70 brothers. Well, 69 of them. Jothan, the youngest, escapes.

On the day of Abimelek's coronation, Jothan shows himself and tells a sharp fable about trees seeking a king.  The point of the story: Abimelek will be a lousy king and will bring ruin upon himself and the people of Shechem.

Usually Saul is credited with being Israel's first king. Abimelek has a strong claim to the title.

After three years of Abimelek's reign, the Shechemites, inspired by YHWH and stirred up by a newcomer named Gaal, fight against Abimelek. They lose. Abimelek sets fire to the city's tower and kills about a thousand men and women trapped inside.

Abimelek then marches against the city of Thebez. When he tries to burn its tower, one of the women inside drops an "upper millstone" on his head. Abimelek has his armor-bearer run him through with a sword so that no one can say he was killed by a woman.

Nasty business. The slide into chaos is well begun. 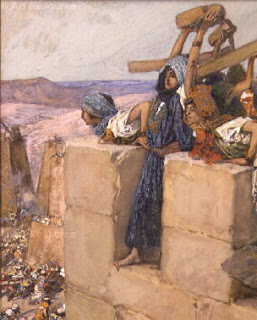