THE YEAR OF BLOGGING BIBLICALLY: DAY 150 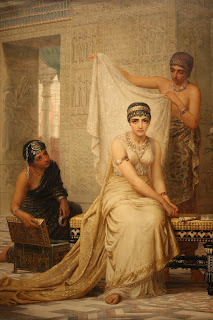 I know that some people treat the book of Esther as a straightforward account of historical events. The evidence against such a reading is significant. The book bears a closer resemblance to what we call historical fiction. It is a fictional story set in the historical past. Some have suggested that it is close in form to a Greek comedy. Others have pointed out that Esther is related to other biblical accounts of Jews in foreign courts like Daniel and the Joseph saga from Genesis.

Whatever its genre, Esther tells a wonderful story with moments of drama, comedy, suspense, and horror. It is a curiosity among biblical literature. It is one of two books named for a woman (the other being Ruth). It is the only book of the Bible that does not explicitly mention God. Some commentators find God at work throughout the book, always hidden, implicit, and behind the scenes. Fasting is the only religious practice mentioned. Prayer is notably absent from Esther, unless you read it in the Septuagint. The ancient Greek translation includes several additions including lengthy prayers by some of the main characters.

The action takes place in the city of Susa, capitol of the Persian empire, and particularly in the court of King Ahasuerus. The name "Ahaseurus" means simply "chief leader." The meaning is similar to the Greek Xerxes, and it is often assumed that the king refered to is Xerxes I of Persia.  The book of Ezra (4:6) does refer to Xerxes as Ahasuerus. The NIV "helpfully" "translates" Ahaseurus as "Xerxes" throughout the book of Esther. But the identification is by no means clear. The Septuagint assumed Ahasuerus to be Xerxes's successor Artaxerxes.

King Ahaseurus, whoever he was, is portrayed as being rather weak, foolish, and easily misled. Not good qualities for the most powerful man in the world.

Ahasuerus's queen, Vashti, earns the king's displeasure when she refuses to present herself wearing her crown before a crowd of his drunken male guests. Commentators love to point out that an ancient rabbinic text suggested that Vashti was to appear wearing only her crown. Regardless, Vashti is deposed and an edict is made declaring that all men are the rulers in their own houses.

There are a lot of feasts, a lot of drinking, and a lot of edicts in this story.

Also among the main characters of this story is Mordecai "the Jew" a citizen of Susa. nHe is a Benjaminite, a member of the tribe that many generations earlier spawned Saul, Israel's first king. Mordecai uncovers a plot against Ahasuerus's life but goes, temporarily, unrewarded.

Mordecai has an enemy, a powerful member of Ahasuerus's court named Haman. He is a stock villian, treacherous and vain. He is an Agagite, that is an Amalekite, a traditional enemy of Mordecai's tribe. For reasons undisclosed, Haman is elevated to prominence by Ahasuerus. If traditional tribal enmity does not explain Haman's grudge against Mordecai and all the Jews, then the fact that Mordecai won't bow to him does. Everybody else bows down to Haman. Why not Mordecai. This really bugs Haman.

Again, the text gives no reason for Mordecai's failure to bow.

And that brings us to the book's title character, Esther. She is a beautiful and shapely young woman. An orphan, she is raised by her uncle.

After Vashti is sent into exile, Ahasuerus's advisers come up with a plan to find a new queen. Beautiful virgins from all over the empire are brought into the king's harem. Esther, naturally enough, is among them. After they are groomed and beautified by the king's eunuch's, the women are brought, one a night, to the king's bed. It is good to be king, I suppose. It's not so great to be a harem girl. Unless you are Esther. Esther pleases everyone, especially the king, and is made queen of all Persia. Oh, yeah, at Mordecai's advice, Esther has not told anyone that she is Jewish. 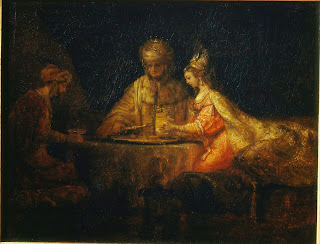 Haman tricks and bribes the feckless king into approving a pogrom against all the Jews in the Persian empire. When Mordecai learns of the plot, he informs Esther. After three days of fasting, she screws up the courage to enter the king's throne room, a move that could cost her life. Happily, the king welcomes her. Esther then invites Ahasuerus and Haman to a private dinner party. At that party, she invites them to come back the next day.

At the end of chapter 5, it is night. Haman has built a 75 foot tall pole on which he plans to impale Mordecai. The death of all the Jews in Persia seems sure.

For fans of old movie serials, this seems an appropriate place to end today's episode. 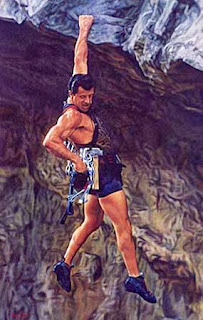