THE YEAR OF BLOGGING BIBLICALLY: DAY 153

Even those who defend the historicity of the book of Job do so weakly, tentatively.  Set in the age of the Patriarchesm a time that I have called "mythic history," in the otherwise unknown land of Uz, if there is a nugget of historical fact behind this story it is probably unrecoverable. But this is not a grave concern. It is best, I think, to read the book for what it is, a theological/philosophical poem about God's ineffable sovereignty, the problem of human suffering, and the possibility of faithfulness.

After Eliphaz finishes his defense of God's righteousness, Job speaks again. He holds God responsible for his tragic situation (as any good monotheist must) but he does not reject God. If God killed me now, he says, and released me from this torture I would die with the consolation that at least I did not deny God. (Job 6:8-10).

Job compares his friends to a dry wadi. They are unreliable. They promise what they do not deliver. They ignore his valid complaints.

Chapter 7 is addressed directly to God. Job will pray several times in this book. His friends speak only to him. Job insists that he will complain to God. God denies him even the comfort of sleep.

Verse 17 ff.asks the same question as Psalm 8:4. "What are human beings that you (God) pay them any mind?" The Psalmist's answer is comforting. "You have made us a little lower than the angels." Job's answer is quite different, "You meddle, micromanage, and punish. You won't leave us alone." 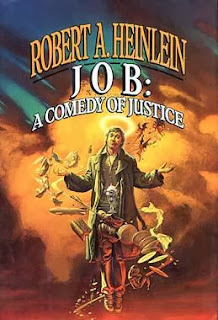 Science fiction author Robert Heinlein was no great friend to religion and he had some particularly sharp skewers for Christian fundamentalism in Job: A Comedy of Justice. I don't know if he'd have appreciated me calling the book a midrash, but I think it is. It is also an entertaining read.