THE YEAR OF BLOGGING BIBLICALLY: DAY 159 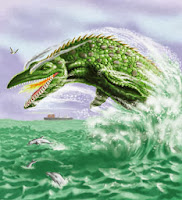 To this point, the book of Job has proceeded in an orderly way. The speakers have taken turns. After Job opened the conversation (chapter 3) the order was: Eliphaz (chapters 4-5), Job (chapters 6-7), Bildad (chapter 8), Job (chapters 9-10) , Zophar (chapter 11), Job (chapters 12-14). This cycle repeated itself (chapters 15-21) and a third iteration seems to have begun with Eliphaz (chapter 22). Today the orderly continuity is interrupted. Bildad's third speech is cut short. Zophar doesn't get a third turn. Job says things that are uncharacteristic. The bottom line: some scholars think that, at some point in the process of transmission and redaction, the book of Job fell into disarray at chapter 25.

In the 6 short verses of chapter 25, Bildad states that God is great and people are no darn good.

In chapter 26, Job begins with the, by now, customary insults. He then speaks of God's greatness in creation. (Some scholars think this part of the speech actually belongs with Bildad's previous lines). Job's words reflect a different creation myth than the familiar ones from Genesis. Rahab (verse 12, cf. Job 9:13, Psalm 87:4, 89:10, Isaiah 30:7, 51:9) refers to a mythical sea monster and not the harlot with a heart of gold from Joshua 2.

In chapter 27 Job defends his virtue once more. Beginning at verse 7 Job describes the punishment of the wicked, a passage that some scholars think may actually be Zophar's third speech.

Chapter 28 is a poem about the hiddenness of wisdom. The chapter heading in the NIV calls this an "interlude." It does seem somewhat out of place. I suppose it might be Job's reply to Zophar's hypothetical third speech.