THE YEAR OF BLOGGING BIBLICALLY: DAY 152 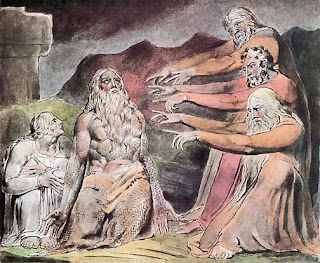 Job is, in my opinion, the most sublime and subversive book of the Bible.

The dominant theology of the Hebrew Bible holds that God rewards the righteous and punishes the unjust. Israel prospers when it is aligned with YHWH's will. Catastrophe happens when Israel is disobedient. The book of Job, which tells the story of a righteous man who suffers unjustly at God's hand, undermines this notion.

Job is an extended philosophical conversation in poetic form framed by a prose story. This book raises more questions than it answers: Why be righteous? Why serve YHWH? Why do the righteous suffer? Is God just?

Job is a story of theodicy and theophany. Its title character is a wealthy man with many flocks and a large family. He is upright in all his dealings and faithful to YHWH his God.

One day in the courts of heaven YHWH brags about his boy Job. The Satan happens to be present. This is not the devil of later tradition. The Satan stands rightfully in God's presence. He challenges YHWH's boast. Job, the Satan suggests, would not be so loyal if he weren't so richly rewarded. It's game on. YHWH bets on his boy's faithfulness and allows the Satan to take everything away from Job--family, possessions, everything--except his health. In short order Job's possessions are lost and his children killed.

Don't miss the point: Job suffers horrible loss, and will suffer illness as well, because YHWH has made a bet with the Satan.

Still, Job will not curse God. Even in grief he remains faithful:


So YHWH and the Satan up the ante. YHWH allows the Satan to take away Job's health. The only limit is that the Satan must not kill Job. Soon, Job is sitting in a ash heap, scraping his festering sores with a potsherd. His wife encourages him to "Curse God and die." There is a tradition that claims she is taunting him shrewishly, increasing his burden. I tend to think that her words convey sympathy and distress over Job's plight. Why not curse the God who has done this to Job? If it means death, then death is preferable to the agony that Job is suffering. But Job will not curse God.

"Will we take the good from God and not the bad?"


Then Job's three friends, Eliphaz, Bildad, and Zophar come to sit with him. They sit in silence for a week. This is the kindness of companionship. I believe that the three are true friends. When they get around to speaking, I think they mean well. They will mouth the pious, false platitudes of Deuteronomistic theology. They will, in short, blame the victim.

But it is Job who speaks first. In his first poetic speech, Job wishes he had never been born. Stillbirth would have been preferable to this suffering.

Eliphaz is the first to respond. Today's passage ends in the middle of the speech in which he repeats the conventional wisdom. God is righteous therefore those upon whom God inflicts suffering deserve it. Accept God's punishment and you will prosper again. 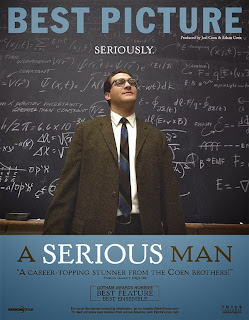 The Coen brothers' movie A Serious Man is an interesting midrash on the book of Job. Like the book of Job itself, this movie won't be to everyone's taste. I found it fascinating and thoughtful.