THE YEAR OF BLOGGING BIBLICALLY: DAY 158

The question of Theodicy (from two Greek roots meaning God and justice) or the problem of evil can be stated thus:

All three of these statements cannot be true.

In his book Why Religon Matters, Huston Smith says that, in any human community of sufficient size, whether that is your workplace or the local Presbyterian church, you will meet four kinds of people. There are:

Theodicy is a monotheist's dilemma. Evil is not a problem for atheists, polytheists, or mystics. But for those who say there is only one God, that one God must be responsible for all things: good and evil, weal and woe.

The post-holocaust Jewish theology I've read tends to assert that God is good but not all-powerful. This, I think, is the position of Rabbi Maurice Harris whose book, Leviticus: You Have No Idea I reviewed recently.

At any rate, the book of Job is a conversation among monotheists. Job's "comforters" take it upon themselves to defend God's goodness. Job, they insist, must have done something to deserve his punishment. Eliphaz, Bildad, and Zophar, all three, adhere to an idea that I would call "deuteronomistic orthodoxy." It is the dominant theology of the Old Testament and found especially in the deutoronomistic history: God punishes wickedness and rewards righteousness.In chapter 15, Eliphaz, sounding very much like a Calvinist, asserted that all humans are "impure." In chapter 11 Zophar argued that God had already forgiven "some" of Job's sin, suggesting that Job (and perhaps all people) deserve worse from God. These arguments sound a little smug coming from people who are not weeping for dead children and scraping their sores with a potsherd. They also make God sound capricious if not monstrous.

Throughout the book, Job holds God responsible for his suffering. He knows that the righteous suffer and that the wicked are not always punished. Many Christians, recognizing this same truth, defer God's punishments and rewards to a life after death. The idea can certainly be found in the New Testament and, as I understand it, was born in intertestamental Judaism. As best I can tell, the book of Job doesn't have much idea of an afterlife.

The book of Job will resolve, or perhaps leave unresolved, the question of theodicy by an appeal to God's ineffability. It will also leave us pondering whether, apart from the threat of punishment or promise of reward, one can, or even should, pursue righteousness.

Job (along with Ecclesiastes, Proverbs, and some of the Psalms) fits the genre of "Wisdom Literature." It invites us to ponder big questions. Whether Job's answers are more satisfying than the deuteronomistic orthodoxy it rejects, readers will have to decide for themselves. Perhaps the great value of this sublime, subversive book is that it challenges us to think through the questions.

Chapter 22 has Eliphaz stating bluntly that Job is a sinner. He even lists the sins that he imagines Job has committed. Job needs to repent in order to be restored.

In chapter 23 Job answers that he is afraid, terrified, of God but wants the opportunity to defend himself before God. He continues in chapter 24, asking when God will judge those who genuinely do wrong. 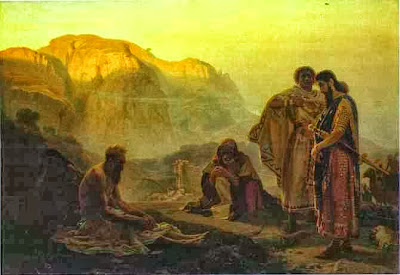