THE YEAR OF BLOGGING BIBLICALLY: DAY 164

After asserting his power over creation and the wild beasts, YHWH pauses, challenging Job to speak (40:1-2). Job declines. (40:3-5). So YHWH continues provlaiming his superiority over Job (40:6-14)

Then YHWH goes on to describe he great land monster Behemoth. Some commentators equate the beast with hippopotamus and, honestly, it kind of sounds like a hippo eccept that hippos don't have bronze bones and tails like cedars. That "tail" might be a euphemism for genitalia. Young Earth Creationists (YECs) claim that humans and dinosaurs shared the earth. Behemoth was a dinosaur, they claim. That would account for the tail, I suppose, but contradicts well-established scientific facts. Personally I think Behemoth is a strictly mythical beast and the author of Job knew as much. This section of the poem is separated from the passage dealing with real animals in chapter 39 by that brief dialogue in 40:1-5 and YHWH's assertion of power in 40:6-14.

Chapter 41 describes another mythical beast, the fire-breathing sea monster Leviathan. Some YECs claim that Leviathan was also a dinosaur and that some dinosaurs did breathe fire. Uhmmmm...yeah.

The point of the Behemoth and Leviathan passages is that the Creator God, YHWH, is mightier than even the most fearsome, if mythical, creatures of earth and sea.

In 42:1-6, Job responds to YHWH. He admits his human limitations. He is not as powerful as YHWH. He is unable to fully comprehend God. "I despise myself and repent in dust and ashes," he says.

The word "myself" is not in the Hebrew text. Then phrase "I repent in dust and ashes" could also mean "I repent of dust and ashes" (i.e. Job repents of repentance). Some commentators seem to think that Job is being sarcastic.

Me? I think that a recognition of personal inadequacy and repentance are appropriate responses to a theophany. This doesn't mean that Job has admitted culpability, only that he recognizes his creaturely status.

How about you? How do you read Job's response to God?

In the closing verses of this book we find a prose epilogue in which Eliphaz, Bildad, and Zophar get their comeuppance. (Where is Elihu?) Job's fotunes are restored. He gets twice as many livestock as he had before. He has 7 more sons and three more daughters. Curiously we learn the girls names but not the boys. Also curiously the girls receive a share of the inheritance with their brothers. Job lives to the age of 140.

I have always felt that this ending to Job is a bit too pat. It undermines what has come before. It's like that old joke about playing a country record backwards. 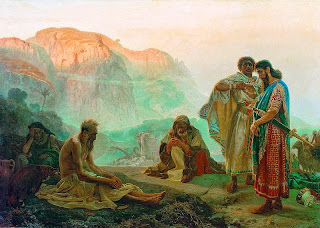 I snagged the illustration from Exploring Our Matrix where, by coincidence, Dr. james McGrath also posted about Job on the day I wrote thispost. I think I'll put up one more post regarding Job before moving on to the Psalms.