THE YEAR OF BLOGGING BIBLICALLY: DAY 161 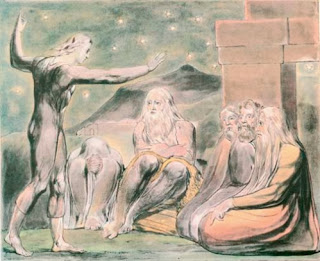 Elihu comes out of nowhere. He has not been mentioned before in the book of Job. After he speaks (for 6 chapters) he is not mentioned again. The narrative flows as well, better even, if Elihu's chapters are omitted. It seems likely that chapters 32-37 were added to the text by a later hand, a redactor who, like Elihu in the narrative, didn't like Job's self-justification or his companions' failure to refute him. Elihu quotes from earlier speeches, reiterates the companions' points and anticipates God's speech.

Elihu gets his own prose introduction (32:1-5). The reason he has not spoken before? He is younger than Eliphaz, Bildad, and Zophar and so has been listening respectfully. Now he can no longer keep silent. He, too, by his own declaration, is wise. He will speak the truth without flattery.

Does Elihu offer a better refutation of Job than did his elders? We shall see.

In chapter 33 Elihu addresses Job. (He is the only character in this story who addresses Job by name). He insists that God does speak to people through dreams and by visiting them with disease. God will also, through the ministry of some intercessor angel, restore the repentant (33:23-25).

In chapter 34 Elihu addresses Eliphaz, Bildad, and Zophar, as well as Job. God, he says, is just, powerful, and sovereign. God can do as he pleases. Job has spoken from ignorance.

By anticipating God's speech, Elihu introduces a new element: sovereignty. But, by insisting upon God's justice in the face of Job's unjust suffering, he only reiterates the arguments of his elders. He has three more chapters to prove himself.