THE YEAR OF BLOGGING BIBLICALLY: DAY 160

The interlude, or whatever it was, of chapter 28 declared that wisdom is hidden like gold in a mine. It concluded with an aphorism found elsewhere in the Hebrew Bible (e.g. Psalm 111:10, Proverbs 9:10) "The fear of the Lord is wisdom."

In chapters 29-31 Job makes his last extended speech. He will have another line or two after God has his say, but this is Job's last real discourse. It divides neatly into three parts and the chapter divisions seem to fall in the right spots.

In chapter 29 Job longs for the good old days when he enjoyed good health and the respect of his fellow citizens. He recounts the good things that he did on behalf of the needy and oppressed.

In chapter 30 Job laments his current condition: he is sick and despised. God has treated him cruelly.

In chapter 31 Job uses a series of if-then statements to once again assert his innocence. Once again he calls up God to answer him.

These three chapters are eloquent and filled with vivid metaphors. Read them for yourself! 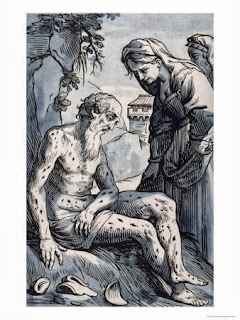