THE YEAR OF BLOGGING BIBLICALLY: DAY 151 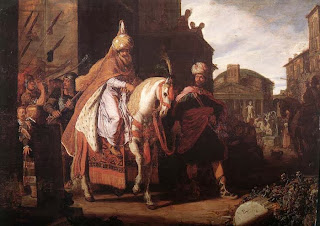 I want to say "faithful" here but I don't think that's quite right. Faithfulness implies keeping Jewish traditions, eating kosher, circumcision, prayer. The Jewish characters in this book are shown doing none of those things. The only religious practice specifically mentioned is fasting. Unlike Daniel, Esther shows no scruples about eating what is set before her. Mordecai will not bow down to Haman but the reason for this is never made explicit. Other Jews apparently did bow to Haman and no judgment is rendered against them in the text. Mordecai's argument with Haman seems almost personal.

So perhaps the purpose of Esther is to encourage its Jewish readers to remain Jewish, whatever that means. To remain unassimilated while living among Gentiles.

That is assuming there is a higher purpose than telling a darn good story.

At night king Ahaseurus is troubled by the thought that he has forgotten something. A search of the royal archives shows that he hasn't done anything to honor Mordecai who saved his life. What to do?

Haman, our villian, arrives early to see the king about having Mordecai impaled. Before Haman can make his request, the king asks his advice. "What should I do for someone I wish to honor?" Haman thinks the king means him. Royal robes, a royal horse, a trip around the open square led by a prince shouting "This is what the king does for someone he wishes to honor" sounds appealing. When he suggests it, the king agrees.

In a great comic reversal, Haman ends up shouting praises to Mordecai while leading the horse upon which Mordecai sits in splendid garb.

At her second banquet with Ahasuerus and Haman, Esther reveals herself as Jewish. She denounces Haman who has tricked the king into ordering a pogrom against the Jews in Persia. The king storms out. Haman pleads with Esther for his life. The king returns to find Haman seemingly assaulting his queen. He orders Haman to be impaled on the 75 foot tall pole he erected to kill Mordecai. Mordecai is given all of the authority that formerly belonged to Haman.

There remains the problem of the massacre of the Jews which Ahasuerus ordered. It seems that the king's edict cannot be changed. But a second edict is issued which permits the Jews to defend against their enemies. I'm not sure why they need permission to defend themselves, but they get it.

This is where the story goes off the rails for me. It's one thing to humiliate Haman. It's another thing to massacre 75,000 enemies. At least the Jews don't take plunder, which was also permitted to them. This suggests that they were fighting for survival, not for wealth.

The annual Jewish holiday Purim celebrates the survival of the Jews. Esther herself is said to have ordered its observance. It seems that at the time of this books writing there was a discrepancy in the date of the celebration. The Jews in the country celebrated a day before the city Jews. This difference is given a "historical" basis in Esther when a second day of fighting takes place in Susa, but not in the provinces.

The three short verses that comprise chapter 10 of Esther laud Mordecai the Jew. Strangely Esther is not mentioned in this epilogue. Perhaps this is another commentary on the status of women in the culture that produced the Hebrew Bible.

The Talmud instructs Jewish men to drink freely on Purim until they can no longer distinguish between "Cursed be Haman" and "Blessed be Mordecai." Except for the emphasis on drinking, Purim fits the general pattern of Jewish holidays: "They tried to kill us. We survived. Let's eat."