THE YEAR OF BLOGGING BIBLICALLY: DAY 168 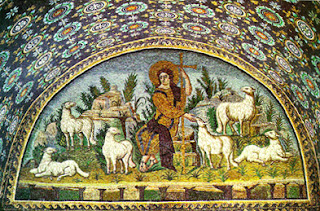 Today's five psalms are all ascribed to David.

Psalm 21 is a royal psalm, possibly a liturgy with different verses spoken by king, a priest or prophet, and the people.  It praises YHWH for his goodness to the king, especially in granting victory over the king's enemies. Verses 8-12 are somewhat confusing as they seem to conflate God and the king.

According to Mark 15:34 and Matthew 27:46, Psalm 22 was quoted by Jesus on the cross. "My God, my God, why have you forsaken me?" This is a deeply personal lament and probably rings true with anyone who has felt abandoned by God.

Verses 3-5 express the psalmist's cause for hope: God is powerful and has helped his ancestors.

In verses 6-8, the psalmist calls himself a "worm." This is not a confession of sin or moral failing. It is a statement of the psalmist's abject condition.

Verses 9-10 are Job-like, almost an accusation: "You made me trust you."

Verse 11-18 asks God to be near because the psalmist is surrounded by enemies and suffering physically. Whether the physical complaints are actual or metaphorical is an open question.

Verses 19-21 are a prayer for relief, or deliverance, or...I hesitate to use the word "salvation" because it is easily misunderstood, but the psalmist wants to be made safe.

In verses 22-26 the psalmist, apparently now reassured that he will be safe, makes a public declaration of what YHWH has done and  promises to share with the needy.

Verses 27-29 envisions the results of the psalmist's proclamation: universal worship of YHWH including generations past and generations yet to be born.

Not that you asked, but I like Psalm 22, for many reasons I resonate with it today. That's the deal with the psalms. It is often possible to find yourself in them.

Many people find themselves in Psalm 23.

True story: Some years ago I was called to the bedside of a dying woman. She had been unresponsive for some days. Her family had gathered expecting the crisis to come at any moment. I did a brief service of commendation and then the family sort of scattered around the house. At one point I was talking with the dying woman's daughter across the hospital bed. She said, "When I was a girl mom made sure I memorized the Lord's Prayer, the Creed, and the Twenty-third Psalm."

The dying woman opened her eyes and spoke for the first time in days. "Do you still remember it?" she asked.

The daughter and I recited the psalm together, "The Lord is my shepherd; I shall not want...."

The woman didn't speak again and died a couple of days later.

Anyway, a lot of people resonate with Psalm 23's intimate images of God's care and providence.

There are a couple of interesting shifts in the psalm. Verses 1-3 speak of God in the third person. Beginning at verse 4 God is addressed in the second person. In verse 5 the imagery shifts from a pastoral scene of sheep and shepherd to a victory banquet.

The final verse of this short psalm talks about dwelling "in the house of the Lord forever." This is probably a reference, possibly metaphorical, to life-long residence in the Temple. It was almost certainly not a reference to an eternal afterlife, though it is often read that way.

Psalm 24 begins by declaring that the earth and everything in it belong to YHWH. It seems to be a liturgy for entering the temple. Those who are morally right are worthy to enter. The end of the psalm is about YHWH entering the city of Jerusalem, perhaps it was used when the ark was brought through the city gates.

Finally Psalm 25 is an alphabetical acrostic (though it skips the Hebrew letters vav and qof). It is an expression of trust and a prayer for protection. The New Interpreters Study Bible notes point out that it has a chiastic structure focusing on verse 11.

This blogpost is already too long to explain that last sentence.