THE YEAR OF BLOGGING BIBLICALLY: DAY 154

I have heard a lot of stupid, well-meaning but stupid things said to people in grief.


People who say such things probably mean well. They want to offer some comfort to the mourner. Maybe they want to relieve their own discomfort at a friend's grief. It would be better, of course, to say nothing than to echo empty theological platitudes. It would be better simply to be present, to listen, to share one's grief. But well-meaning people say stupid things to those who mourn. I've heard a lot of them.

I have never heard anything as nakedly cruel as what Bildad the Shuhite says to Job, "Your children sinned. God delivered them into the power of their transgression" (Job 8:4). Really. That's what he says. "God killed your kids because they were sinners."

Bildad cites the conventional wisdom of past ages: Forget God and wither like a plant without soil or water. But God does not reject a blameless person (implying that Job, in his current suffering is not blameless, though we know better). Return to God and you will prosper once more.

Job answers that God clearly has the upper hand here. God is mightier than mortals. God is invisible and remote. Job cannot argue with God even though Job is innocent. God has turned against Job and Job has no recourse.

Job's wish for "someone to arbitrate" (NIV, "an umpire," NRSV) is sometimes taken as a prophecy of Christ's incarnation. This isn't a terrible Christian interpretation, but it pretty clearly is not what the author of Job had in mind. 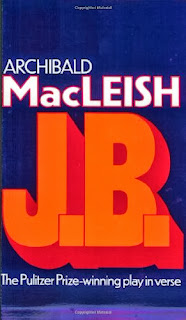 Another midrash on Job, Archibald MacLeish's play J.B. hails from the day of the gray flannel suit but still has its pleasures. Among them God and Satan as circus employees.