THE YEAR OF BLOGGING BIBLICALLY: DAY 169 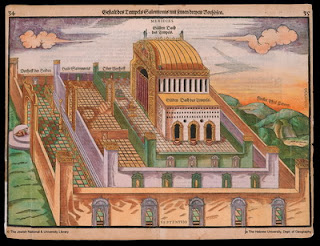 We have six psalms today, all attributed to David. Five of them refer to the temple.

In psalm 26 the psalmist asks for vindication. He feels that he deserves YHWH's help because he is innocent and blameless and loves the temple.

Psalm 27 expresses trust in YHWH. The psalmist declares that he has nothing to fear even though he is the target of malicious lies.

Psalm 28 is a prayer for help. "Do not drag me away with the wicked," says the psalmist, perhaps indicating that he lives among people upon whom he expects judgment to fall, like Lot living in Sodom. This psalm ends with an expression of thanksgiving for God's help.

Psalm 29 describes the power of God's voice using the imagery of a storm. The Babylonian god Baal, whose worship was an ongoing problem in Israel, was the god of the storm. Perhaps this psalm deliberately borrows imagery from Baal worship to assert YHWH's superiority.

The heading of Psalm 30 says that it is a song for the dedication of the temple. Its content, however, is a prayer of thanksgiving for recovery from illness.

Psalm 31 asks for deliverance from enemies. It ends with an expression of thanksgiving. Verse 5 ("Into your hands I commit my spirit...") will be familiar to anyone who has read Luke's account of Jesus' crucifixion.