THE YEAR OF BLOGGING BIBLICALLY: DAY 29 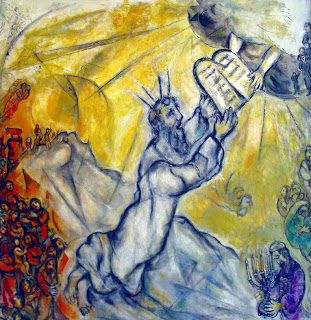 One debt that English speakers owe to the writers of the Bible is that they have enriched our language with bright phrases and sharp metaphors. In the thirty-third chapter of Exodus we encounter at least two of them. Canaan is described as a land flowing with "milk and honey." And the stubborn Israelites are called "stiff-necked."

In the wake of the bloodbath at the base of Mt. Sinai (also known as Horeb) YHWH announces that he no longer wishes to travel with the Israelites.

Moses has a tent outside of the camp where he goes to talk face-to-face with God. The two chat like old buddies. (This is before the Tabernacle is built). There is a mysterious statement that "Joshua did not leave the tent." Whether he was in the tent with Moses and YHWH or standing guard outside is not clear to me.

As a result of their negotiations inside( the tent?), YHWH tells Moses that he will travel along with the Israelites after all. Moses requests to see the Lord's glory, and the Lord agrees, though Moses will not be allowed to look upon the Lord's face, lest he die. This is another of those inconsistencies that accrue from the fact that the text has been compiled and redacted from disparate sources. Sometimes it seems that Moses (and perhaps others) see the Lord's face. Other times we are told that no one can see the Lord's face and live.

The Lord again describes himself as YHWH (I am who I am), and says  "I will have mercy upon whom I have mercy and show compassion to whom I show compassion." This is a radical statement of God's sovereignty. It may be noteworthy that the Lord does not add a corollary statement to the effect that "I will destroy whom I destroy" or "I will condemn whom I condemn." After the massacre of the idolators in the last chapter could God be mellowing? We've noted before that God seems to change and grow.

The thirty-fourth chapter begins with notice that Moses has fashioned two new tablets on which God will re-write his laws. These replacement tablets give hope once more for a graphological analysis of YHWH's handwriting.

The Lord, as he promised, now shows Moses his glory and declares his name: "YHWH, YHWH, merciful and gracious, slow to anger, and abounding in steadfast love and faithfulness." Variations of this description will recur several times in the Hebrew Scriptures. Context will tell whether the authors of Scripture think God's good nature extends only to Israel or to all people. In this instance we do have a negative corollary. While YHWH shows mercy to the thousandth generation, he likewise punishes wrongdoing, punishing even the children of those who do wrong. And their children. To the third and fourth generations.

In another of the many repetitions and doublets we get in the Pentateuch, the Lord once again agrees to travel on with the Israelites. He warns that the Israelites, when they move into Canaan, are not to compromise with the people who live there. The Lord is jealous.

Is there a positive way to spin jealousy?

The Israelites are not to eat the sacrifices that the Canaanites make. Questions about food offered to idols will continue into the New Testament.

Verses 17 ff. repeat several commandments that were given earlier. In verse 28, God rewrites his laws, specified now as the Ten Commandments, on the stone tablets that Moses prepared.

Verses 29 ff. describe how Moses' face glows with the reflection of God's glory after his chats with YHWH. This, and the veil that Moses wears, will be significant when we read 2 Corinthians.

Because the Hebrew for rays or beams (i.e. of light) can also mean horns, Moses is sometimes depicted in art with horns sprouting from his head. 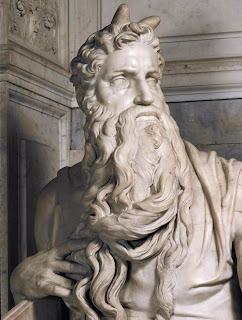 In chapter 35, Moses takes up the collection of materials for the construction of the Tabernacle, its furnishings, the priestly vestments, etc. The Lord commanded this collection back in chapter 25. The people give all sorts of jewelry to provide the necessary gold. Including earrings. I guess they had more earrings than the ones they gave to Aaron to make the golden calf.