THE YEAR OF BLOGGING BIBLICALLY: DAY 42

Some might argue that the Book of Numbers, with all those numbers, is the most boring book of the Bible. It certainly doesn't come on like Gangbusters.* Personally I find the opening chapters of 1 Chronicles, with their endless genealogies, much duller. Mark Twain described the Book of Mormon (the actual book, not the musical play by the same name) as "chloroform in print." That pretty much sums up my feelings about 1 Chronicles 1-9. But, we'll get to that....

In chapter 1 of Numbers, the Lord instructs Moses to take a census of the Israelites. He is to count the men, age 20 and up, who are fit for military service. Presumably they all pay the half-shekel head tax that was commanded in Exodus 30 and, mysteriously, already collected in Exodus 38. A leader from each of the 12 tribes is chosen to assist with the project.

The Levites are exempted from the census in order to care for the Tabernacle. I have heard that during the Viet Nam war seminaries were full of students seeking a religious exemption from the draft. Levites get a sort of religious exemption but a person has to be born into the tribe. This is one way, I suppose, to prevent draft dodging.

Verses 20-43 are boilerplate. In each paragraph only the name of the tribe and the number of men changes.

Chapter 2 repeats the names of the tribal leaders and the numbers of the men counted in the census as it describes how the Israelites are to set up their encampments and the order in which they are to march.

A picture is worth a lot of words: 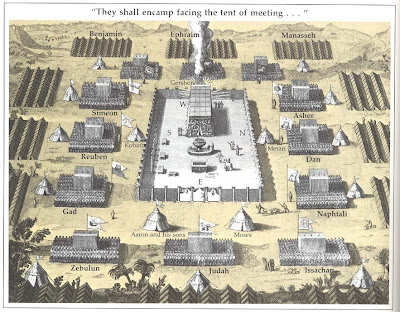 *Does anyone still know this reference?
Posted by Brant Clements at 12:00 PM