The Year of Blogging Biblically: Day 40 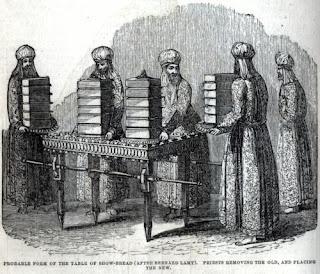 We are still reading in that part of Leviticus called the "Holiness Code." Chapter 24 begins with instructions that the Israelites are to provide pure olive oil for the Tabernacle lamp. Different translations handle verse three variously. Some make it seem that Aaron must personally tend the lamp all night. Others offer the more likely possibility that Aaron should "set up" the lamp to burn all night.

Verses 5-9 contain instructions concerning what the King James Version charmingly called the shewbread. Twelve loaves of unleavened bread (one for each tribe?) were placed on the table in the Tabernacle. The loaves were replaced each week and eaten by the priests. Incense was placed on the table with the bread..

Verses 10-23 narrate the story of a man who is stoned to death for the crime of blasphemy, for cursing the Name of the Lord. In the circles that I travel blasphemy doesn't seem to be  taken very seriously. "God" is used as a a mild expletive. "God damn" and "Jesus" are thoughtless expressions of anger or surprise.  Of course, none of these are the Name that the blasphemer in these verses misused. He said "YHWH" with the vowels intact.

I intentionally avoid using the Name of the Lord. Some devout Jews will not even write the word "God" preferring to use G-d, even though God is not a name, but more of a job description.

Occasionally I encounter someone who uses blasphemy deliberately, usually with the intention of offending believers. I tend to shrug it off. Being deliberately provocative reflects badly on the provoker. And on those who get provoked. I remember the Danish newspaper that published cartoon depictions of Muhammad back in 2005. It was a childish act of provocation. Sadly, it drew exactly the reaction it desired.

In the middle of this passage about the blasphemer, the principle of "an eye for an eye" is restated. I've heard it said that this principle serves to put a limit on punishment and retribution. Maybe so. By a coincidence, my Twitter feed today included a quote attributed to Mahatma Ghandi:

An eye for an eye will only make the whole world blind.


Though I wouldn't advocate the death penalty for blasphemy today, and though I prefer to deal with provocation by ignoring it, I think the world would be better if we were all more sensitive to one another, and a little more conscious of casual blasphemy.

Chapter  25 contains instructions for Sabbath years, and for the year of Jubilee. These instructions look forward (at least in narrative time) to the days when the Israelites will be settled in Canaan.

Every seventh year is to be a Sabbath year. No crops are to be planted. The land is supposed to rest. The people will be sustained by the harvests of previous years and by the food that grows by itself. This may be a sound agricultural practice, preventing the soil from being depleted. It may also be a lesson in trusting God's providence.

Every fiftieth year is to be a Jubilee.


Whether the year of Jubilee was ever actually observed is an open question.

In a previous post I asked the question "Were there no mules in ancient Israel?" A simple search of the Old Testament shows that there were. Either they were used, but, as the offspring of two different kinds of animals were considered unclean OR donkeys and horses were not considered to be of different kinds.