THE YEAR OF BLOGGING BIBLICALLY: DAY 46

The first five books of the Bible--Genesis, Exodus, Leviticus, Numbers, and Deuteronomy--are collectively called the Pentateuch.  Sometimes they are also called the "Five Books of Moses" and there is a very old tradition that claims Moses was their author. This is highly unlikely if not impossible. Still, there are believers who defend the notion.

Scholars tell us that the Pentateuch is actually a composite document, compiled from several sources, and edited long ago into a single narrative. Critical scholarship has developed a highly refined theory of the sources behind the Pentateuch. If you are interested in the details, google "Documentary Hypothesis." As always, read with discernment. There is some good information out there. There is also some crap.

When a text is woven together from diverse sources it is almost bound to contain repetitions, inconsistencies, and perhaps even contradictions. 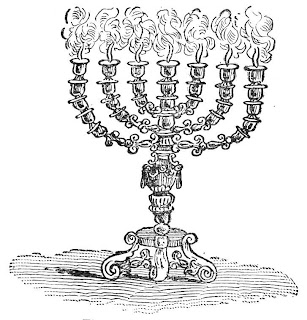 Numbers 8 begins with Aaron lighting the seven oil lamps in the Tabernacle's lampstand. Beginning at verse 5 there is a description of the ceremony ordaining the Levites for their service in the Tabernacle. Back in Numbers 4, a census was taken of the Levites aged 30-50. In Numbers 8:23-25, we learn that the years of their service is from ages 25-50. I have no idea why the 25-29 year old weren't counted. It may have to do with the sources behind the text.

Chapter 9 tells how the Israelites celebrated the first Passover outside of Egypt. A provision is made for those who, for reasons of ritual uncleanness or travel, cannot join in the celebration. Their Passover will be held one month later. Exceptions like this reveal a certain grace. The Law is not meant to be a burden.

Verses 15 ff. concern the pillar of cloud and fire, symbolizing YHWH's presence, which leads the Israelites through the wilderness.

Chapter 10 describes the construction and use of a pair of silver trumpets which are used to signal various kinds of information to the Israelites.Verses 11-28 describe the Israelites departure from Sinai and the order in which the tribes march.

Then, in verses 29 ff.  we find Moses in conference with his father-in-law. In Exodus 2, the man was called Reuel. In Exodus 18, he was known as Jethro. Here he is called Hobab, son of Reuel. Granting that Reuel might be a clan or tribal name, and granting that a lot of biblical characters (and places) are known by more than one name, there is no real problem here. I would venture a guess that the various names of Moses' father-in-law come from different sources. The fact that Jethro is said to have gone back to his home back at Exodus 18:27, and there is no mention of his return to the Israelite camp, and yet here he is as Hobab being invited to travel with the Israelites....Let's just call it a continuity mistake.

I'm not entirely sure whether Moses persuaded his father-in-law to travel along or not.

Numbers 10 concludes with the "Song of the Ark." This consists of two sets of verses, one for departure and one for arrival, which describe YHWH as a warrior.