THE YEAR OF BLOGGING BIBLICALLY: DAY 39 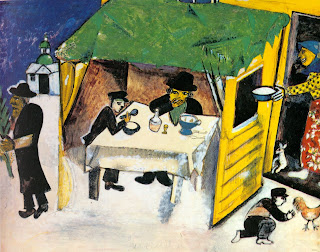 Leviticus 22 begins with further instructions for Israel's priests. To handle or consume sacrificial meat, they must be in a state of cleanness, that is, ritual purity. The penalty is death, which is apparently the direct and inevitable result of infraction.

Like the priests themselves, animals offered for sacrifice must not have physical defects. The only exception is an animal given as a freewill offering. In this case, the animal may have a bad leg.

Verse 26 specifies that an animal less than 8 days old should not be used as a sacrifice. The reason for this is not made clear in the text. In verse 28 YHWH instructs that an animal and its offspring should not be sacrificed on the same day. Footnotes in various study Bibles suggest that this is a matter of humane concern. Animals may be killed, offered as sacrifices, and/or eaten but they should not be treated cruelly.

Chapter 23 is a calendar of sabbaths and festivals. One purpose of religion is to consecrate time. The weekly sabbath is to be a day of rest. There is to be an annual Passover sacrifice followed by a week-long celebration of the festival of Unleavened Bread.

Next there is an offering of first fruits, and on the fiftieth day after the Passover comes a harvest festival, the festival of Weeks (Shavuot, in Hebrew).

Finally, on the fifteenth day of the seventh month, the Festival of Booths (Sukkoth) begins. During this festival the Israelites live in temporary shelters in remembrance of the temporary shelters that their ancestors lived in while traveling from Egypt to Canaan.

It should be obvious that these festivals and observances, though they are commanded here, will be kept in the narrative future, after the Israelite occupation of Canaan, when they can grow crops, and when they will need to remember the events of the Exodus.