THE YEAR OF BLOGGING BIBLICALLY: DAY 51

War stories, told from the victor's point of view, tend to cast the conquered as the bad guys. This is Israel's story. In Numbers 21, the Israelites encounter, and defeat destroy a succession of enemies. First up, the Canaanite king Arad, who attacks the Israelites. Arad's cities are utterly destroyed, committed to YHWH. 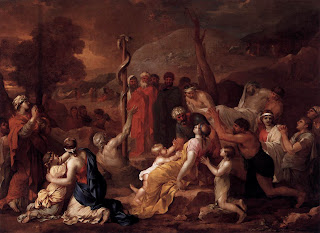 In verses 4-9 the Israelites begin to whine to Moses once more. We've heard their complaints before: "Why did you bring us out of Egypt? There's nothing to eat. There's no water to drink." YHWH gets a bit testy and sends poisonous snakes to bite the people. When the people repent, Moses intercedes. The Lord instructs him to make a bronze snake and set it up on a pole. In what I take to be another example of sympathetic magic, looking at the bronze serpent cures snakebite.

The snake on the pole is used in Christian art (and preaching, I'm sure) as a figure of Christ on the cross.

Idolatry has been defined as the sin of mistaking the good for the best. Generations later King Hezekiah will destroy the bronze serpent because the people have been worshiping it, calling it the "Nehushtan."

Verses 10-20 describe the Israelites travel toward Moab. There are two intriguing quotes in this section. The first (v. 14-15) is from an otherwise unknown Book of the Wars of the Lord. The second (vv. 17-18) is a song about a well.

Verses 21-35 tell of the defeat of Kings Sihon and Og. The Isrealites ask Sihon if they may pass through his territory in the same terms that they made the request of Edom. Sihon marches against them and loses. There is more poetry.

The difference in the way that Sihon is treated compared to the Edomites is striking. Edom and Israel (Esau and Jacob) were brothers. That counts for something.

Next King Og of Bashan is defeated. The Israelites possess the lands of Sihon and Og.

Chapter 22 begins the story of Balaam. Though not, as far as I can tell, an Israelite, Balaam seems to be a prophet or priest of YHWH.* He is summoned by Balak, the king of Moab. (Moab's namesake, if you will recall, was the child born of an incestuous coupling between Lot and one of his daughters). Balak wants Balaam to curse the Israelites. At first, Balaam demurs.

When Balak asks a second time, Balaam consults with YHWH and is given permission to accompany Balak's men to see the king. "But do only what I tell you," YHWH says.

Balaam does what YHWH says and, mysteriously, this makes YHWH angry. He sends an angel to prevent Balaam from traveling to Balak. Three times Balaam's donkey balks at the sight of the angel. (Balaam himself cannot see the angel). Three times Balaam beats the hapless animal. Then YHWH gives the donkey a voice to chide its master. Balaam finally sees the angel and realizes that the donkey has saved his life.

When I was a child, the story of Balaam's Ass (as dear King James and the good old Revised Standard Version called it) could give me a fit of the giggles. (Hehehe! The pastor said "ass"). Now that I'm more mature (not much more) I realize that there is deep, intentional humor in this story. From the ignoble origins of the Moabites, to the talking donkey, to the fact that Balaam is thwarted at every turn, the story is meant to be funny. Maybe even God's unaccountable change of heart about Balaam going to Balak (Doh! You did what I said!) is supposed to be humorous.

I know Christians who insist that this story is a factual account of historical events. I don't share that opinion. I don't really mind if they take the story literally. Just so they don't take it seriously. 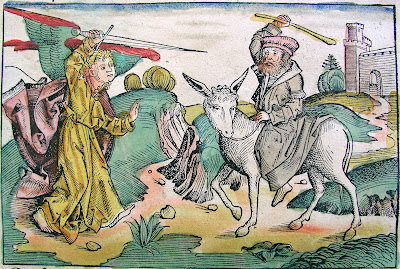 *For what it's worth, 2 Peter 2:16 calls Balaam a prophet: "A dumb ass** spoke with human voice and restrained the prophet's madness."

***Is there a rule about putting footnotes in footnotes?