THE YEAR OF BLOGGING BIBLICALLY: DAY 50

The Levite rebellion has been quashed. The priestly hierarchy is secure. Numbers 18 outlines (and in part reiterates) the duties of the priests and Levites. It also specifies the terms of their pay. The tithes that the Israelites bring to the Tabernacle/Temple belong to the priests, although they give a tithe (1/10) of the tithes to God as offerings.

Chapter 19 describes the Water of Cleansing, which is used to purify anyone who has come into contact, or even proximity, with a corpse. The water is made with the ashes of a red heifer.* A minority faction of Jews today would like to rebuild the Temple in Jerusalem. Some Fundamentalist Christians, who believe that Jesus will not return until the Temple is rebuilt, are partnering with them. There are people breeding red cattle in preparation for the day a new Temple is dedicated. Without the ashes of a red heifer, the priests cannot be purified for service.

I have to say that trying to take the Temple Mount and rebuild the Temple is one of the loopier and more dangerous ideas floating around.

Verse 18 once again mentions the hyssop plant in connection with ritual cleansing.

At the beginning of Chapter 20 we read of the death of Miriam. She gets scant notice, but she is one of only a few women whose deaths are recorded in the Bible. 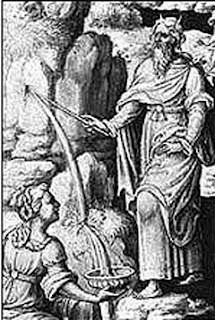 Verses 2-13 are a curious doublet of Exodus 17, where Moses supplies the thirsty Israelites with water from a rock. Once again the name Meribah (meaning something like "contention") is used. This time, however, Moses does something wrong and YHWH forbids him from entering the land of promise. The exact nature of Moses' trespass is not entirely clear. Probably he didn't give YHWH credit for the miracle. Deuteronomy 3:26 gives an alternate reason for God's forbidding Moses to enter Canaan.

In verses 14-21 the Israelites are forbidden to cross the land of Edom. The Edomites are the descendants of Esau. The old rivalry between Jacob and Esau is still playing out generations later. Rather than confront the Edomites, the Israelites choose another route.

In verses 22-29, we read of the death of Aaron. It is told in much fuller detail than the death of his sister, Miriam. Aaron's son Eleazer is appointed high priest in his father's place.


*A heifer is a young cow that has not yet had a calf. Or, as a rancher once told me, "The difference between a heifer and a cow is a bull."