THE YEAR OF BLOGGING BIBLICALLY: DAY 53

In Numbers 26, Moses and Eleazer the high priest take a second census of the Israelites. The total number of men aged 20 and up is 601,730. The entire generation that refused to enter Canaan has died off from fire, plagues, snakebite, and probably natural causes. Only faithful Caleb and Joshua survive.

The purpose of the census is to determine allotments of real estate when Canaan is conquered. Larger tribes get more land. The Levites, who are not apportioned land, number an additional 23,000 men, aged 1 month and up.

We learn that the rebel leader Korah's line has not died out completely. This sounds ominous but it doesn't amount to anything. The Korahites will be found keeping the gates of the Tabernacle in 1 Chronicles 9:19. 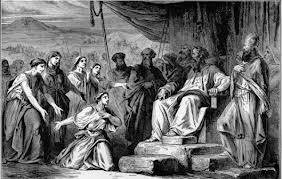 Verse 27 begins with a remarkable event. The daughters of Zelophehad request an allotment of land and they receive it. YHWH not only approves of their request but makes it a rule: if a man has no sons, his daughters may inherit his land.

The daughters of Zelophehad are important enough to be mentioned 5 times in the Old Testament.

If you're thinking that this all sounds too good to be true, you're right. In Numbers 36 the rule is amended so that daughters who inherit must marry within their own tribe. Otherwise ownership of their land would fall to another tribe.

It is a man's world.

Since Moses is not allowed to enter the land of promise, he appoints Joshua as his succesor (vv. 13 ff.).