THE YEAR OF BLOGGING BIBLICALLY: DAY 33 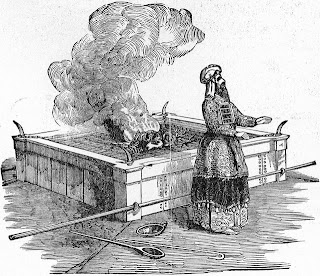 In the secular pluralistic society of modern America, we distinguish between crimes and sins. Criminal offenses are defined by the state. Sin is the church's bailiwick. In the theocracy of ancient Israel government and religion were allied. There was no distinction between sins and crimes. Some offenses that we might consider criminal required a religious sacrifice.

It is possible to offend the Lord unintentionally. Chapter 5 begins with instructions for dealing with unintentional sins once they are brought to light. Provisions are made for those who cannot afford to make expensive offerings. In place of a lamb, a poor person may offer 2 pigeons. If even that is a financial burden, a grain offering of 1/10th of an ephah (roughly 3 quarts) of flour may be offered.

5:14 ff. give instructions for guilt offerings. When one has sinned against the "holy things" (i.e. the tabernacle and its furnishings) or harmed their neighbor's property they must make a sacrifice (to make atonement with God?), restore the damaged property (to make atonement with the neighbor?), and pay an additional 5% penalty (as punishment for the misdeed?).

Since there are offenses that require the death penalty, and since the 5% penalty seems to be a punishment on top of the restored property, it is hard to imagine that the sacrifice, in this case at least, is meant to substitute for the offender's punishment.

What I'm saying is this: There is a commonly held Christian theory of atonement that suggests that Jesus served as a sacrifice, bearing sinners' punishment, appeasing God's justice, and thereby making reconciliation between God and humanity. I am not a fan of this theory of so-called penal substitutionary atonement. (There are other, more irenic theories of atonement). Penal substitution portrays God as bloodthirsty and monstrous. It seems to me that it is also based on a misunderstanding of the Old Testament practice of animal sacrifice.*

Chapters 6 and 7 contain further instructions regarding sacrifices for sin, guilt, and well-being (or fellowship). 7:22-27 command that the Israelites refrain from consuming blood and fat. Blood, as I speculated in my last post, contained life and was therefore returned to the Lord.

Fat...well, let's admit it...fat is tasty. All you bacon lovers out there know what I'm talking about. I'm thinking that fat may have belonged to YHWH because, as God, he got the choicest portions.

7:28 ff. tell us that the priests got to eat portions of the sacrifices they offered on behalf of the people. This was their pay. Interestingly, the priests do not receive a portion of sacrifices made for themselves or for the entire community. A footnote in my Lutheran Study Bible suggests that this may have been to prevent abuse of the system.

*The theory of penal substitutionary atonement was first articulated by Anselm in the 11th century, at a long cultural remove from the practice of animal sacrifice.
Next: Leviticus 8-10
Posted by Brant Clements at 1:41 PM