THE YEAR OF BLOGGING BIBLICALLY: DAY 47

YHWH comes off as a vengeful sort of deity in Numbers 11. When the Israelites get whiny about their troubles, God begins destroying them by fire. Moses has to intervene. (Numbers 11:1-3).

It is not uncommon, even today, for people to attribute natural disasters, diseases, and all sorts of misfortunes to God's agency. What do you think? Is this what God is like?

Next the people begin to complain about having nothing but manna to eat. I can understand this. I don't like to eat the same thing day after day, either. The description of the manna in this passage differs slightly in detail from the description in Exodus 16:31. There is a kind of over-the-top humor in this passage. The people remember all the tasty foods they ate "for nothing" (v. 5) in Egypt, overlooking the fact that they worked as slave laborers. The Lord gets angry. Then Moses complains about playing nursemaid to 600,000 people. "Kill me now," he says (v. 15).

Interjected into this account is a story of how Moses, at YHWH's instruction,  appoints 70 leaders in Israel to share his burden. This story doubles, in some ways, the appointment of the judges in Exodus 18. The elders are gathered in one place. When two men Eldad and Medad (mentioned nowhere else in Scripture) begin to prophesy apart from the group, Moses defends them, and in the process defends God's sovreignty.

The Lord promises the Israelites the meat that they desire. So much that it will come out their noses! (v. 20). Meat comes in the form of quails, as it did in Exodus 16. I didn't realize that the quails had ever stopped coming. I'm thinking this represents another case of multiple sources being combined into a single narrative.

As an aside, I don't think I've ever eaten quail. I know I've never eaten manna.

God, angry, strikes the people with a plague (v. 33). God's vengeance gives names to various places. The people move on.

Chapter 12 is, to be frank, confusing. Aaron and Miriam start to bellyache because Moses has married a Cushite (i.e. not Israelite) woman. Is this Cushite wife Zipporah, the daughter of Jethro/Reuel/Hobab? Why didn't his siblings complain before? Or has Moses married another woman?

At any rate, Miriam and Aaron challenge Moses' leadership. An editorial comment (v. 3) assures us that Moses is "the most humble person on earth." At the Tent of Meeting, God affirms his special relationship with Moses and Miriam is afflicted with a skin disease, at least temporarily. The text does not say that YHWH made Miriam leprous, though that seems to be the implication. Moses intervenes again, and the Lord reduces Miriam's sentence to one week of leprosy.

Aaron gets off scot-free. What's up with that? Is it because he is the High Priest and cannot afford to be unclean? Is it another case of male privelege?

In chapter 13, Moses sends 12 men to spy out the land of Canaan. Moses changes the name of Hoshea to Joshua. Curiously, the name Hoshea was only used for this man in the book of Numbers. Back in Exodus he was already knows as Joshua.

On their return, the spies, (carrying a huge bunch of grapes from Canaan) report that the land, flowing with milk and honey, is full of fortified cities and occupied by giants. One of the spies, Caleb, recommends immediate occupation of the land. The people are unconvinced. 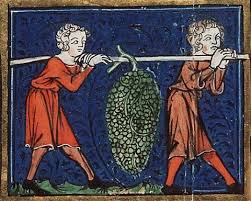