THE YEAR OF BLOGGING BIBLICALLY: DAY 52 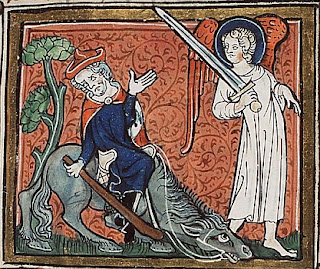 The story of Balaam continues. It is clear now that he is a prophet. YHWH speaks through him. It seems that he may also "practice divination" (Numbers 24:1 NIV), or "look for omens" (NRSV).

Balaam's story continues in its humorous vein. King Balak has offered him a rich payment if he will curse Israel. Seven altars are built. Seven bulls and seven rams are sacrificed. Balaam goes to consult with YHWH and, instead of cursing the Israelites, he blesses them.

Balak is chagrined, but thinks a change of venue might, somehow help his cause. Seven more altars are built. Seven more bulls and rams are sacrificed. Balaam consults YHWH again, and again Balaam blesses Israel. Balak, understandably upset, basically tells Balaam, "If you can't curse them, at least don't bless them" (23:25).

In comedy there is a rule of threes. 1. An event is told. 2. The event is repeated, establishing a pattern. 3. The pattern is broken, to comic effect. The pattern being broken can also serve a dramatic effect. In the case of Balaam the third iteration turns a comic tale serious.

Balak suggests yet another new location. (It worked out so well before). Seven more altars are built. Seven more bulls and seven more rams are sacrificed. Then the pattern is broken...

As chapter 24 begins, Balaam does not go away to consult YHWH. The Lord speaks to him and through him right where he is. Balaam blesses Israel again. Balak angrily refuses to pay Balaam, yet Balaam will not shut up. He goes on to pronounce curses against the peoples of Canaan: Moab, Sheth, Edom, Seir, Amalek, and the Kenites will be conquered by Isreal. Ships from Cyprus will come to conquer Ashur and Eber.

When an Israelite man named Zimri dares to bring a Midianite woman named Kozbi into the camp, into his family, into his tent, Aaron's grandson Phinehas grabs a spear and runs the offender (in flagrante delicto) clean through.

In the Hebrew Scriptures there is a current of hospitality and openness to outsiders. There is also an opposite current of xenophobia and concern for ethnic purity. This episode is an ugly example of the latter. 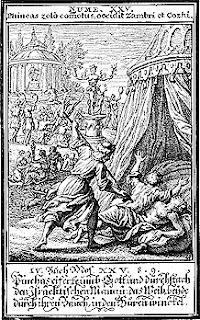