THE YEAR OF BLOGGING BIBLICALLY: DAY 49 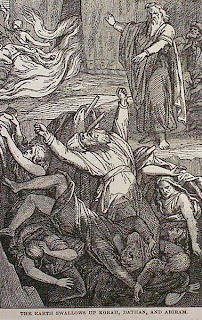 The Rebellions against Moses' leadership are not over. In Numbers 16, some Levites named Korah, Dathan, and Abiram, along with 250 of their fellows, confront Moses. The whole people, they say, are holy. Why are only Moses and Aaron allowed to approach the Lord in the Tabernacle? These upstarts seem to be advocating anarchy, though it seems more likely to me that they simply want a share in the hierarchy.

Again, some details of this narrative are not entirely clear, probably because multiple sources were combined to create it.

Moses says that YHWH can choose the leadership and tells the 250 rebels to bring their censers to the Tent of Meeting the next day.

In verse 20, YHWH is prepared to destroy the entire assembly, probably meaning all of the Israelites. Moses persuades God otherwise.

Korah. and presumably Dathan, and Abiram, along with their entire families are swallowed up by the earth and go down to  Sheol alive. Sheol is the shadowy, subterranean abode of the dead. Later ideas of eternal punishment and reward are not in play here. The righteous and unrighteous both end in Sheol.

The 250 rebellious Levites are consumed by fire. Their bronze censers are beaten into sheets and used as a covering for the Tabernacle's altar, a lasting reminder that God has chosen only Aaron's family to serve as priests.

In verse 41, there is more angry rebellion. The people complain that Moses has "killed the Lord's people." The Lord sends a plague that kills another 14,700 of them before Moses and Aaron can intervene on their behalf.

The mourning and mass burials that must have followed are not narrated.

In chapter 17, Moses declares a test that should forestall further uprisings. The 12 tribal leaders of the Israelites all present their staffs (or is it staves?) to Moses who places them before the Ark of the Covenant. In the morning Aaron's staff, and only Aaron's staff, has budded, blossomed, and produced almonds.

Verses 12-13 record the people's horrified, mournful reaction. "We're all going to die!" they wail. No one offers them comfort. In fact they will all die. But not immediately. 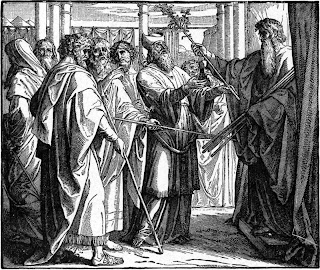