THE YEAR OF BLOGGING BIBLICALLY: DAY 106 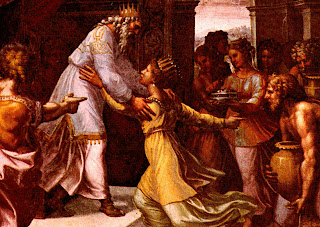 When the queen of Sheba hears of Solomon's wealth an wisdom, she comes to check him out. Whether there was a king of Sheba (or whether she was queen regnant) no one knows. Nor are we quite sure where Sheba was. Modern Yemen is a leading contender. Ethiopians like to claim that the queen came from their land. Oh, and she was impregnated by Solomon and that emporer Haile Selassie I, the "Lion of the Tribe of Judah," was a descendant of Solomon. Rastafarians claim that he was God incarnate.

All of which takes us afield of the passage at hand.

Let's just say that the queen was overwhelmed by what she saw. She brought large quantities of gold, jewels, and spices as gifts. Israel knows unprecedented material wealth in Solomon's day.

The "splendor of Solomon" was a byword that Jesus could use as a negative comparison to the beauty with which God adorns the "lilies of the field" (Matthew 6:28 ff.).

But we learn in chapter 11 that all is not well. Solomon loves many foreign women. To accommodate his many brides and concubines, he builds shrines to foreign gods: Astarte, Chemosh, Molech, and Milcom. YHWH, being by his own admission a "jealous god" (Exodus 20:5 et al.) is none to happy with this. YHWH tells Solomon that he will take most of the kingdom away from him. For David's sake (because David was such a sterling character) YHWH will not divide the kingdom until after Solomon's death.

Solomon has a few enemies. Hadad the Edomite holds a grudge because Joab killed a lot of his kin back in David's day. Rezon, son of Eliada, is the leader of a rebel band. And then there's Jeroboam.

Jeroboam is in charge of Solomon's forced laborers. A prophet named Ahijah is out walking with Jeroboam one day. Ahijah takes off his new cloak and, in one of those object lessons that Israel's prophets were so good at, tears it into 12 pieces. YHWH, Ahijah says, is about to tear Israel apart. Ten tribes will belong to Jeroboam. David's dynasty will have only one tribe, Judah,  left to rule. Solomon, wisely I suppose, tries to eliminate this rival. Jeroboam, also wisely, runs off to Egypt. He'll be back.

Solomon dies. Untold details of his story can be found in the Book of the Acts of Solomon (1 Kings 11:41). If we could only find that book. Solomon's son Rehoboam takes the throne.

The institution of monarchy gets mixed reviews in the Hebrew Bible. Neither YHWH nor Samuel wanted Israel to have a king in the first place. Saul's reign was a flop. David, for all his human foibles, is remembered as a great king. But, oy, those foibles! Solomon was wise and brought great wealth to Israel. Too bad about him marrying those foreign women and worshiping those foreign gods. Can't say we weren't warned though (Deuteronomy 17:17).

We are at the start of another cycle of entropy. Each of the kings of Israel and Judah will be, with limited exceptions, worse than their predecessors.

Posted by Brant Clements at 8:50 PM