THE YEAR OF BLOGGING BIBLICALLY: DAY 107 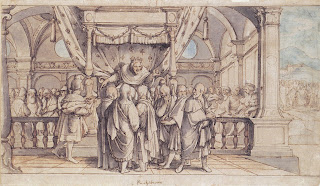 Solomon is dead. Rehoboam is heir apparent to the throne. Israel gathers at Shechem for the coronation. They have one request. "Lighten our labor and we will serve you." Apparently it was not just the Canaanites whom Solomon pressed into labor after all. Somewhere in the editing process, someone wanted to improve Solomon's reputation by denying that he impressed his fellow Israelites into forced labor. In the end, it appears that Solomon was a cruel taskmaster.

In the narrative present, Rehoboam listens to bad advice. His young advisors tell him to say to Israel "My little finger is thicker than my father's...." Some translations take a cowardly though correct way out and render the word as "waist." Others go with the better, though rather obscure, "loins." The truth is. his advisers tell Rehoboam to assert, in a perfectly vulgar way, that he is a bigger man (wink, nudge) than Solomon was. To be blunt, they want him to tell Israel that his pinky is girthier than his old man's penis. And Solomon, with his 1000 wives and concubines, was quite the stud.

This, by the way, explains why a man's children are called the "fruit of his loins."

Perhaps unsurprisingly, the Israelites reject Rehoboam's offer of harder labor and harsher punishment. Ten tribes secede. Their rallying cry, "To your tents, O Israel" echoes the story of Sheba's rebellion from 2 Samuel 20. From now on "Israel" will refer to the northern kingdom (though not exclusively). The southern kingdom will be known as Judah. As predicted, Jeroboam becomes Israel's king.

The secessionists assassinate Rehoboam's officer in charge of forced labor. Rehoboam retreats and then musters his troops. A prophet named Shemiah advises against war and Rehoboam stands down.

In the north, Jeroboam, worried that, because the temple is in Jerusalem his subjects will be drawn toward Judah, builds a couple of worship sites in Israel complete with (ominous chord) golden calves. He even says "Here are your gods, O Israel, who brought you out of Egypt" as Aaron did in Exodus 34.

Here is a good place to note a theological point and a political point. Theologically, the author(s) of 1-2 Kings think idolatry is a Very Bad Thing with Horrible Consequences. Politically, they favor Judah, Jerusalem, and David's dynasty.

Chapter 13 tells the curious story of a Judahite prophet who speaks against Jeroboam's altar at Bethel. He "foretells" the rise of a Judahite king named Josiah who will come along in about 300 years. The scare quotes indicate that this story was written after the fact. Among the odd events of this tale: Jeroboam's hand withers and is restored, an Israelite prophet deceives the Judahite prophet into breaking a vow, a lion kills the southerner but does not eat him, and the northerner buries the man in his own grave.

In spite of the deal with his hand, Jeroboam is undeterred in his idolatrous ways.

When Jeroboam's son Abijah takes ill, the king sends his wife, in a needless and ineffective disguise, to consult a prophet in Shiloh. The prophet's news is not encouraging. Every man in Israel will be killed, the nation destroyed, and the people scattered.

Oh, and the boy dies.

Down in Judah, the people are getting all idolatrous. Egypt steals the gold shields that Solomon made. Rehoboam replaces them with bronze replicas. Things ain't what they once was. Rehoboam is succeeded by his son Abijam.

Ahijah, Abijah, Abijam...it can be tricky keeping all these names straight.