THE YEAR OF  BLOGGING BIBLICALLY: DAY 104 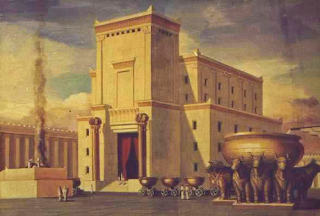 In the passage at hand Solomon builds YHWH's temple in Jerusalem. YHWH's traveling days are over. No longer will the Lord live in a nomad's tent. YHWH has a permanent address.

The temple is described in great detail. Some of the specifics are cool. Others are mysterious and weird. The building blocks were all quarry-dressed. The sounds of metal tools are not heard at the temple site. Two bronze pillars named Boaz and Jachin front the place. The "Sea" is a huge water basin supported by 12 bronze oxen. It holds 11,000 gallons of water. Its exact purpose is unspecified, though ritual washing seems likely.

The bronze work was all done by a Tyrian man named Hiram (or "Huram" in some translations). He is not the same as King Hiram who supplied the materials for the construction.

The temple must have been magnificent. It took 7 years to build. Solomon also had a palace built for himself. That took 13 years. Oh, and he had another built for his Egyptian princess wife.That may say something about how YHWH rates....

With the temple completed Israel's politico-religious complex is firmly established. 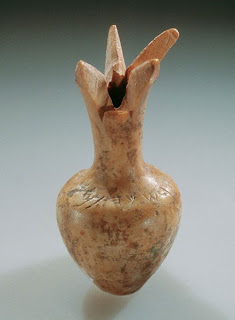 The artifact pictured above is an ivory pomegranate that some believe may be the only known relic from Solomon's temple. Others believe that it is a fake.