THE YEAR OF BLOGGING BIBLICALLY: DAY 108 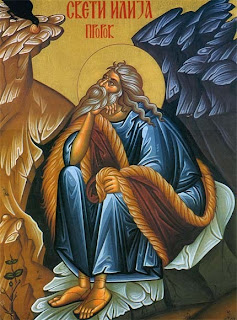 The books of Kings give brief descriptions of the reigns of the monarchs of Israel and Judah. Said monarchs seem to be constantly at war with one another. These books also take time to tell, at some length, the stories of the prophet Elijah and his similarly named protege Elisha who were active in Israel.

King Abijam's reign in Judah is brief. He is as bad as his father Rehoboam. Still, YHWH favors Judah for David's sake. YHWH really liked that guy. And why not? David always did right by YHWH "except in the matter of Uriah the Hittite." (I love that little editorial aside in 1Kings 15:5).

Abijam is succeeded by Asa who is a stand-up guy. He removes the "consecrated workers" from Judah. Some translations call them "male temple prostitutes" but I think no one is quite sure what they really were. Asa even removes his grandmother from her role as queen because of her idolatries. The only thing Asa does wrong: he fails to remove those pesky "high places."

Up in Israel king Nadab tules for 2 years before he is overthrown by Baasha. Thus ends Jeroboam's dynasty. Baasha is evil. According to a prophet named Jehu, his line will end up like Jeroboam's. so, it is no surprise when Baasha's successor son, Elah is overthrown by Zimri.

Zimri sits on Israel's throne only one week before dying as a suicide during a military coup by Omri. Israel is briefly divided between rival kings Omri and Tibni. Tibni's death puts the kingdom in Omri's evil hands alone. Omri establishes the cit of Samaria as Israel's capitol before his death. His son Ahab ascends to the throne.

Ahab takes the kingship of Israel to new depths of depravity. He marries a Sidonian princess whose name has become synonymous with feminine evil: Jezebel. Together they worship, and encourage ne worship, of foreign gods, rivals to YHWH, idols.

But before Elijah's sudden entrance, we note that during Ahab's reign Hiel rebuilds the city of Jericho. It costs him the lives of his eldest and youngest sons. Were they human sacrifices? It isn't quite clear. The Hebrew Bible can be reticent about such things. Revisit the story of Jjephthah's daughter (Judges 11)  for another example of this.  At any rate this fulfills the curse that Joshua pronounced (Joshua 6:26).

Elijah comes on stage unannounced. He tells Ahab that a bad drought is coming. Then he goes to hide out at a brook where YHWH, with the help of some ravens, provides for him. When the brook runs dry Elijah moves in with a gentile widow and her son at Zarephath. They form a little community of trust. YHWH provides for all three. When the boy dies, Elijah invokes YHWH to raise him.

These scenes will re-echo in the stories of Elisha and Jesus. Jesus will also invoke the story of the widow of Zarephath in Luke 4:26.