THE YEAR OF BLOGGING BIBLICALLY: DAY 113

In his book The Language of God, Francis Collins offers a definition of miracle that I rather like. He uses three criteria, which me may have borrowed from C. S. Lewis. (I no longer own the book. Can anyone confirm or deny this?) 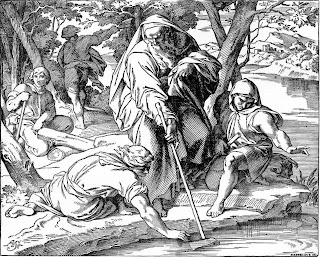 The story of the floating axe head (2 Kings 6:1-7) is cool. It certainly meets the first two criteria but I think it fails on the third. Let's face it, this is more of a magic trick than a miracle. I'd like to see it happen. I'm just not sure it says anything meaningful about God.

The next story in the Elisha cycle has Elisha eavesdropping by some remote cognition on the plans of the Aramaen king and his army. This one I think has a better claim to miracle status. The significance is that God favors Israel and, God is generous even to enemies. There are wonderful comic touches in the blind Aramaen soldiers being led into the heart of the capitol and being treated to a feast. "The Aramaens no longer came raiding into the land of Israel (2 Kings 6:23)" at least temporarily.

In the very next verse king Ben-Hadad of Aram beseiges the city of Samaria. Ancient cities were surrounded by walls. The walls provided protection for the citizens but also made seige possible. An enemy army could surround the city, blocking its entrances and exits. Supplied from the outside, the beseigers only needed to wait until conditions in the city deteriorated into hard-to-imagine horror.

Prices for even barely-edible foodstuffs within Samaria are outrageous. Eighty shekels of silver for a donkey's head; five shekels for a cup of dove's dung. Correct me if I'm wrong, but I don't think that kosher law considers either of these things clean.

I know that cannibalism is not lawful. When, in a scene that grimly echoes Solomon's episode in 1 Kings 3, the king of Israel learns of two women who are squabbling over eating a baby, he tears his clothes in grief revealing the sackcloth of repentance he wears underneath. I guess the king needed to blame someone. He sends a messenger to execute the prophet Elisha. Either the king or, in the Hebrew text, his messenger despairs of help from YHWH.

In chapter 7 Elisha predicts that the seige will end the following day. Prices for good foodstuffs will be ridiculously low. The messenger won't live to see it.

YHWH intervenes. The Aramaens abandon their camps in fear.

Some lepers, whose condition puts them outside the city gates, decide that their only hope is to surrender to the Aramaens. They find the camp empty and, after squirrelling a few things away for themselves, inform the people of Samaria. As the Samaritan citizens rush out to loot the Aramaen camp, the messenger is trampled to death.

Elisha is proved right on every count. YHWH is vindicated.

In chapter 8 we hear more about the Shunnamite woman who befriended Elisha. That Gehazi, who was a leper last we knew, stands before the king suggests that this story is out of sequence.

In a reversal of Ahaziah's actions in 2 Kings 1, when Ben-Hadad of Aram falls ill he sends Hazael (whom Elijah anointed to be king in Ben-Hadad's stead) to ask YWHW, through Elisha, whether he will recover. There is good news and bad news. The good news: Ben-Hadad will recover. The bad news: Hazael smothers him in his bed.

There is a wonderful scene in which Elisha stares long at Hazael and weeps for the evil he will do to Israel. Hazael assumes the throne of Aram.

Meanwhile, down in Judah,  Jehoram becomes king. He's not much good. He marries one of Ahab's daughters and loses control over some of Judah's vassal states.

After Jehoram, Azariah ascends to Judah's throne. He's not much good either. He too marries a daughter of Ahab. Still, YHWH favors Judah for the sake of king David.