THE YEAR OF BLOGGING BIBLICALLY: DAY 101

As we come to the conclusion of 2 Samuel, we  find an assortment of odds and ends.

Songs bracket the books of Samuel. We read Hannah's song of praise in 1 Samuel 2. In 2 Samuel 22 and 23, we have two songs of David. The first is a psalm in which David expresses gratitude for deliverance he was given by Israel's sovereign God. 2 Samuel 22:7 refers anachronistically to the temple, suggesting that this composition comes for a later time. Verses 21-28 tell how God rewarded the speaker for his righteousness. Clearly this was written without the incident of Bathsheba and Uriah in mind.

Chapter 23 begins with a recitation of David's last words even though, in narrative time, David is not yet dying. David speaks as one inspired directly by God. This poem tells of God's everlasting covenant with David and his descendants. Like a wisdom psalm it compares the godless to worthless thorns.

A list of David's mighty men, including the Three and the Thirty (of whom there are 37), contains a few familiar names, and not a few unfamiliar ones. Joab is mentioned in relation to others, but is not himself included among the warriors.

I love the little story about the Three fetching water from behind enemy lines for their thirsty king and David pouring it out as a libation to YHWH (2 Samuel 23:13-17).

In chapter 24, at YHWH's instigation, David takes a census of the Israelites. After the count is in, David confesses that he did wrong in taking the census (that YHWH told him to take!). YHWH offers David his choice of three punishments. David chooses a three day long plague. YHWH sends an angel to inflict the plague. 70,000 people die. David builds an altar and offers sacrifices at the place where the angel stopped. It's a strange story. 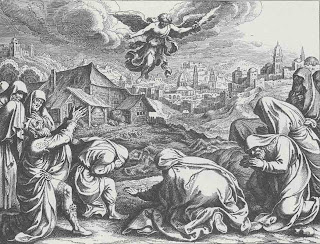 In 1 Samuel 8:10 ff. Samuel warned Israel of all the hardships a king would inflict on his subjects. Saul and David together have vindicated Samuel's words.