THE YEAR OF BLOGGING BIBLICALLY: DAY 110 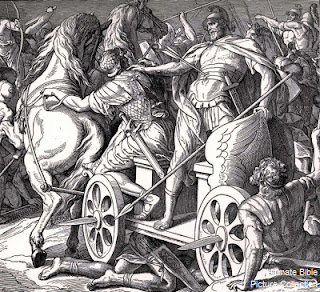 When last seen King Ahab of Israel was in a sullen mood over having been scolded for his kindness to the defeated king Ben-hadad of Aram. In chapter 21, we find him sulking again, this time because a neighbor, Naboth, won't sell him a vineyard even though Ahab has made a fair offer. Generous, even. That family property was important in ancient Israel, not to be sold, and even to be returned to the family in the Jubilee year has been established. We can't fault Naboth for his refusal to sell.

Apart from an irritable nature, The character of Ahab is not always portrayed consistently. Did the final redactor of 1 Kings use different sources? Though he is an idolator and evil without precedent, Ahab is also the recipient of YHWH's blessings in warfare, what is more, YHWH heeds, to some extent, Ahab's repentance. He is sometimes portrayed as weak and indecisive. Rhetorically, this shifts the blame for his wicked ways to Jezebel, his queen.

Jezebel gets less press than Ahab, but she is consistently portrayed. Jezebel is a thoroughgoing idolator, decisive, and evil to the core. When she finds Ahab moping over the vineyard, Jezebel takes charge. She arranges for two false witnesses to accuse Naboth of blasphemy and treason, capitol offenses. Recall that the Torah requires the testimony of "two or three witnesses" for a guilty verdict. Oh, yeah, it also prohibits perjury. The upshot of all this: innocent Naboth is stoned to death.  Ahab gets the vineyard.

If Ahab is happy at last the text does not say. Nor could his pleasure have been long-lived. He is summarily confronted by the prophet Elijah who pronounces judgment. Ahab will die on the same spot as Naboth. Jezebel, too, is doomed. Ahab's dynasty will come to a violent end. At this, Ahab does a full garment-ripping, sackcloth-and-ashes repentance. YHWH relents, a little. Judgment will be deferred one generation.

The last chapter of 1 Kings begins with an odd narrative. Jehoshaphat, king of Judah, comes on the scene with no introduction. Ahab (assuming it is Ahab) is referred to only as "the king of Israel." Surely this story is inserted from another source. At any rate, Jehoshaphat and the king of Israel form an alliance to take Ramoth-gilead (one of the cities of refuge) back from the unnamed (Ben-hadad) king of Aram.

At Jehoshaphat's insistence, they consult 400 prophets of YHWH. Knowing that the books of Kings favor the southern kingdom, it is notable, but not surprising, that the king of Judah is yhe one to seek YHWH's will. All 400 prophets concur. Ahab should attack and be victorious. One of them, Zedekiah by name, illustrates the point with a pair of iron horns. For some reason Jehoshaphat wants one more prophetic opinion. A prophet named Micaiah is summoned. He, reluctantly, gives the straight story. YHWH commissioned a "lying spirit" to deceive the 400 prophets so that Ahab will die in battle.

Those who say that the Bible is God's inerrant word and that God doesn't deceive have some 'splainimg to do. This is a tough one to spin positively. Does one need to accept every word of every biblical author as factual, or even revelatory of God's true nature, to be a Christian? I would say not.

Ainyway, Micaiah gets slapped and thrown into jail. By story's end it appears that, because he was right, he will never get out.

Despite the fact that he goesninto battle in disguise, the king of Idrael is shot with a random arrow and, by days end, bleeds to death. The dogs lick up his blood and yhe prostitutes bathe in it and may I just say "Ick!"

We finally get a proper introduction to king Jehoshaphat of Judah who did right by YHWH, even getting rid of those darn "consecrated workers." His only flaw is a failure to close the shrines. The ancient Israelites and Judahites were not, it seems, good sailors.

1 Kings ends with a note about Ahaziah of Israel. He was no good. We'll hear more about him.