THE YEAR OF BLOGGING BIBLICALLY: DAY 103 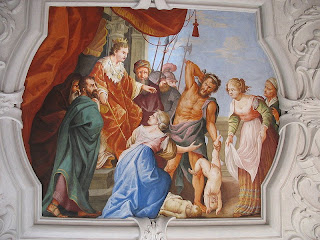 After all the machinations and bloodshed, Solomon's throne is secure. Solomon takes the first of many wives, an Egyptian princess showing some foreign relations savvy.
In 1 Kings 3, Solomon goes to one of Israel's "high places" at Gibeon. The high places are worship sites which, after the temple is constructed, will be an ongoing problem. Their unauthorized worship is often associated with paganism. At this point in the ongoing story, with the temple still a future reality, there is no negative sense to worship at the high places.

In a dream, YHWH offers Solomon his choice of gifts. Solomon asks for wisdom and is rewarded with riches and honor as well. Solomon's name is associated with wisdom the way that David's is associated with music. His wisdom is illustrated with a well-known story in which, to determine which of two women is an infant's real mother, he proposes to cut the child in half. The real mother, of course, will do anything to spare her child, even if it means giving the baby to her rival. It's a great story and has been told with countless variations ("Kill us both, Spock!"). That I can imagine different outcomes may say more about me than about Solomon.

Chapter 4 describes Solomon's administration. He levies taxes against his subjects and puts men to forced labor. Still, they are happy and prosperous. Or so we are told.

Solomon wisdom includes knowledge of the natural world. He can expound on the subjects of animals, birds, reptiles, and fish. The wisdom tradition is important in the Hebrew Bible. It produced the books of Proverbs, Ecclesiastes, and Job. Among other things, the Hebrew wisdom tradition shows an interest in nature.

In chapter 5, king David's old friend Hiram of Tyre renews relations with Solomon's court. Hiram will provide Solomon with the materials needed to build the temple. When David wanted to build a temple, he was told no. YHWH would build David a house, a dynasty, instead (2 Samuel 7). 1 Kings 5:3 gives an alternate explanation for David's failure to build a temple. He was too busy fighting wars.