THE YEAR OF BLOGGING BIBLICALLY: DAY 100 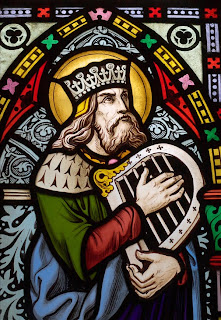 Though the books of Samuel appear to have been compiled from multiple sources, they tell a great, cohesive story. Well, it might be more accurate to say stories as 1 and 2 Samuel relate the interconnected sagas of Saul and David.

Among the fascinating characters of the David saga is Joab, the general of David's army. He seems to be extremely loyal, but rather dangerous and unpredictable. We have seen him treacherously kill Abner. He took it upon himself to kill Absalom in direct contradiction to the king's orders. In the passage at hand, Joab also kills Absalom's general Amasa in spite of the fact, or perhaps because of the fact, that David has appointed Amasa to serve as his own general. But it is also Joab who advises David, rightly, to end his inconsolable weeping for Absalom and act as king lest he lose his kingdom.

It is in these stories of Absalom's rebellion that the people of the north are first called "Israelites" to distinguish them from the southern Judahites.

In victory David is generous to his allies and kind to his enemies. He forgives Shimei, who pelted him with rocks. He negotiates an understanding between Mephibosheth and Ziba. He rewards the gentile Barzillai who provided him with food. The 10 concubines with whom Abasalom had sex are removed from the royal harem but provided for.

David's return to Jerusalem, and his throne, are controversial. The people of Judah, David's kin, welcome him back.  In chapter 20, Sheba, a Benjaminite, kin to Saul, foments a rebellion. The Israelites desert king David. Joab pursues Sheba to a city called Beth Maacah. Under the threat of seige, and at the advice of a wise woman, the citizens of Beth Maacah kill Sheba and toss his head over the city wall to Joab. It's an ugly act but brings peace.

In chapter 21 the Gibeonites air a grievance that they had with Saul. To appease them, David hands over 7 of Saul's descendants to be executed. Mephibosheth is spared. The corpses of the seven are made a public display. When Rizpah, who is mother to two of the seven, makes a vigil over the dead, keeping the scavengers away, David is moved to do the right thing. He sees that the bodies of Saul and Jonathan, and these seven descendants of Saul, are given decent burial.

When there is war with the Philistines, David, weary and weak, is sent home by his men.

Some of the exploits of David's men are recounted including a notice that one Elhanan, son of Jaaregorim, the Bethlehemite, killed the giant Goliath the Gittite. Wait. What?

That's right, Elhanan killed Goliath. Some translations try to gloss this contradiction by saying that Elhanan killed the brother of Goliath. Don't be fooled. Neither the Masoretic text nor the Septuagint say "brother of."

This is, very simply, a contradiction in the Bible.